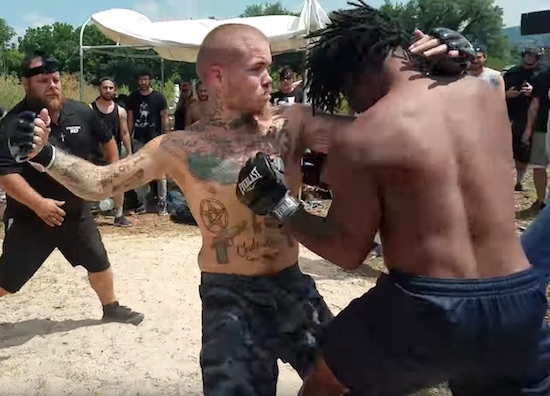 MMA and the UFC has really broken into the mainstream psyche over the last decade or so, so it’s no wonder that everyone and their dog reckons that they’re actually highly skilled fighters and that’s why you see footage like that below.

We’re over with Street Beefs again, where local Virginia boys settle their beef by scrapping it out in ‘Satan’s Backyard’ whose owner goes by the nickname of Scarface and claims that these disputes can only be settled via violence and fighting. In this episode we’ve got some dude called .45 going up against another dude called Doobie and sure, the fight is technically awful but that doesn’t mean it isn’t a completely enjoyable, violent watch:

Damn some of those smacks were really hard weren’t they? Like I was physically wincing and couldn’t believe that Doobie managed to come back and win it after some of the smacks he took at the start. Also love the way that .45 punches the ground once after he’s defeated and kneeling there on the floor like a wuss. Really dramatic.

Anyway, it’s safe to say we’re not gonna see any of these guys competing in the octagon any time soon, but it’s probably more entertaining than some of the UFC fights I’ve seen over the years. Just pure carnage.

For more of the same, check out a previous episode of Street Beefs. Fantastic.