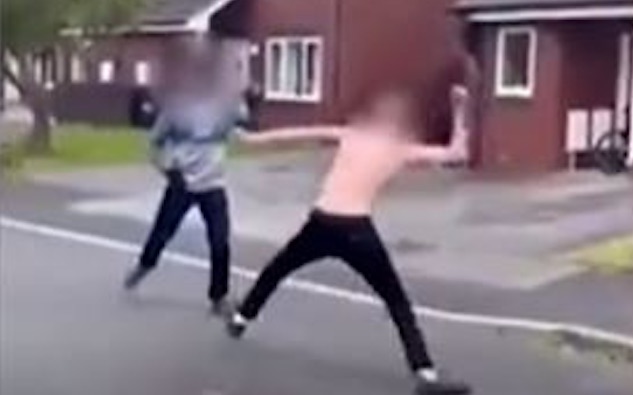 I think normally if you have a beef with someone then you try to settle it by taking them outside and kicking the crap out of each other, but apparently now if it’s really serious then you do it ‘Highlander’ style and grab a couple of machetes and have a sword fight in your cul de sac.

This is exactly what you can see in the video below that comes from a Sunday afternoon in Morecambe of all places. That sounds like it’s gonna be kinda funny, but it’s actually pretty shocking footage and both of the men come off from it looking like they’re severely injured.

Jesus. Imagine driving back from the shops on Sunday and seeing that going down outside your house. Not ideal is it.

Both men were later arrested for assault and Sgt James Pinder of Lancashire Police said the following about the incident:

Two men have been arrested by police in connection with the incident, but we know more people were in the area at the time of the offence and I would encourage witnesses to contact us.

I realise this will have caused concern in Morecambe but incidents of this nature are rare and we want to reassure residents patrols have been increased in the area.

If you have any information which could assist our enquiries or you witnessed the incident please come forward.

Yeah, not really sure if people are going to be reassured by that or not, but there you go. Does kinda seem like the the sort of thing that doesn’t happen too often, but I suppose you can’t be too careful these days. Watch out.

For more of the same, check out this crazy sword fight at a Sikh temple. Mental.