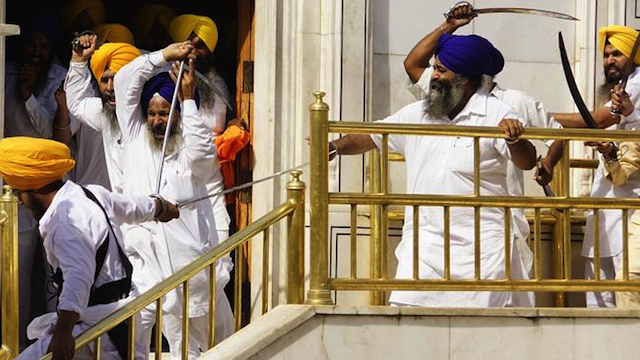 These guys wanted to settle their differences old skool style.

It’s being reported that two sets of rival Sikhs clashed on Friday in a sword fight at India’s Golden Temple in Punjab. Up to 12 people were injured as the lunatics ran around swinging swords at each other as they chased each other around the holiest temple in the Sikh religion.

The riot erupted as it was the 30th anniversary of Operation Blue Star, a controversial army assault on the temple that was designed to flush out armed separatists demanding an independent Sikh homeland. 400 people were killed in the attack.

The riot allegedly started when members of Shiromani Akali Dal (Amritsar) started shouting slogans for an independent homeland and demanded to be let onto the microphone to speak at the tribute. In order to sort these guys out, the temple’s task force decided that the best course of action was to attack them with swords and start a massive sword fight. That’s some old school kinda justice.

In any case, it’s absolutely insane because when the hell do you see a full scale swordfight ever, except in real life? Never, that’s when – it only happens in Bollywood movies these days.