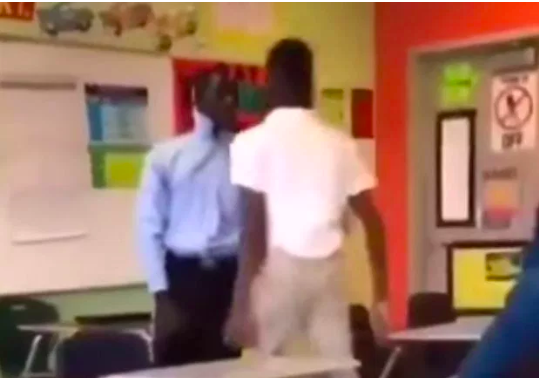 There were times when I was a kid that I really wanted to square up to my teacher and say something to them because they were being completely and utterly unreasonable pricks, but I would always pussy out and meekly retreat into my seat because there was no way I was going to take on a teacher and risk a detention or something.

However, over in what we think is the US, kids don’t have any qualms with squaring up to their teachers – and the teachers don’t seem to have any problem with handing it right back to them either. In the video below, the anonymous student starts on the teacher by chest bumping into them, which leads to a full on fist fight between the two of them that only ends when the teacher goes into full on Dudley Boyz mode and body slams him through a table. Hardcore:

Damn that was a good slam, Goldberg would be proud. There’s no information right now about whether or not the pupil and the student faced any repercussions from this, but you can bet they were probably both struck off or expelled for it because there’s no way they weren’t going to get the book thrown at them for this. They might have earned themselves a WWE contract though, so at least there’s that.

For more teachers attacking students, check out this one where the student actually ends up battering the teacher. Pussy.