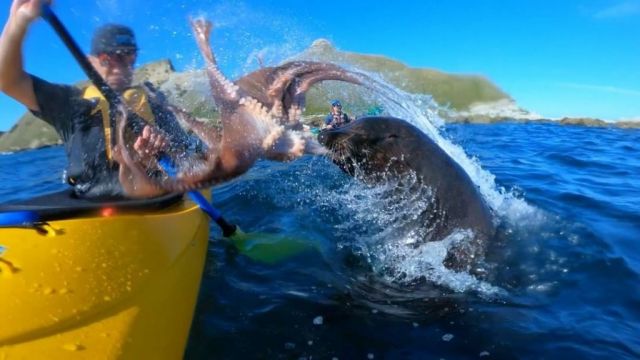 It’s well known that animals and humans don’t get along sometimes and also that animals don’t always get along with other species of animals, but I’ve never heard of one animal using another to attack a human until right now, so this really is something to write home about.

Kyle Mulinder is a kayaker who conveniently works for GoPro and was out testing his new camera out last weekend on some beautiful blue water when he managed to capture something I don’t think has ever been seen before on it, namely a seal picking up a live octopus and belting him in the face with it. Oooof:

I mean yeah, wow, I really haven’t seen anything like that before. Shame it’s over so quickly but still, thanks to GoPro we managed to get the slow motion video of it too.

Before you ask, no this post isn’t sponsored by GoPro but it wouldn’t surprise me if they somehow engineered this event to happen in order to promote their handy little waterproof HD cameras. I mean it’s hella convenient this employee just so happened to be testing his new GoPro out when all of this went down isn’t it – you know what I mean? Yes, you do.

For more octopuses, check out this scientific study that found they become more playful after they’ve consumed MDMA. No shit.