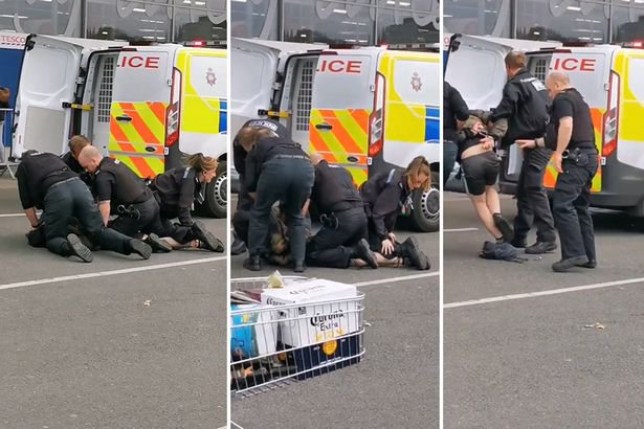 It’s actually kinda surprising how few reports we’ve heard of people being complete and utter dickheads during their trips to he supermarkets during lockdown, but here’s a video of someone screaming and shouting and trying to queue jump at a Tesco in Manchester before getting arrested.

Shopper Robert Comnoiu explains what happened during his visit:

We had just finished our weekly shop. Then we heard screaming.

This man came running from the store and knocked my girlfriend over as he pushed her trying to run away.

A security guard tried to get hold him, but he was getting away. A second guard then came and they got him on the ground.

They let him stand up, but then he started being aggressive again and they kept him on the ground until the police came.

My girlfriend was shocked, but not hurt. I think he had tried to get into the shop without queueing like everyone else.

Apparently when the guy was searched he was also found in possession of Class A and Class B drugs, so that might explain, which might explain why he was being such an asshole. He had also allegedly stolen something from a Co-op earlier on his rampage of terror, so it sounds like he was having quite the eventful day here. No news on his identity either, other than that he was 21 years old.

For more of the same, check out these McDonald’s addicts queuing for three hours to get their fix. Ridiculous.