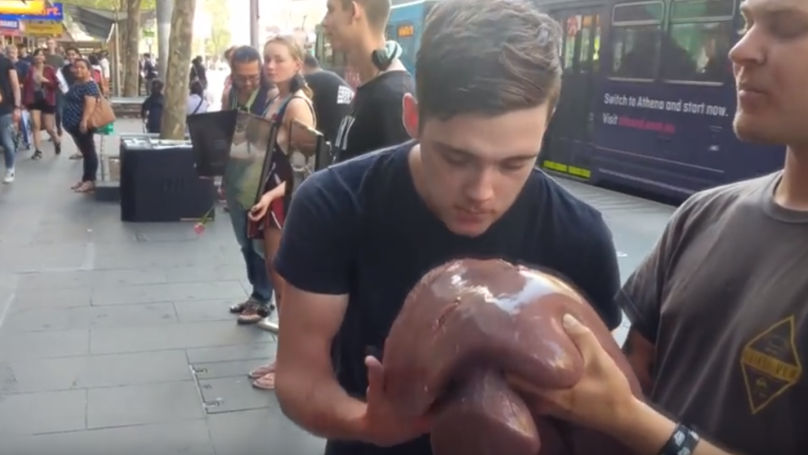 Who is protesting what now?

There’s been an increasing trend in recent days of people showing up at vegan protests/events and eating raw meat in front of them in order to protest what they’re doing and cause outrage and it doesn’t seem like it’s going to go away.

The movement all seems to be the brainchild of a YouTuber called sv3rige and although he’s based in the UK, he’s shared footage of some bros over in Melbourne doing the exact same thing as he does to show how his message is spreading. Apparently these guys worship sv3rige and are determined to eradicate vegans as they’re convinced that their diet leads to malnourishment and that the only true diet is the one advocated by sv3rige – a raw meat diet.

The video is about as stupid as you could imagine with these guys eating the raw liver and arguing with the vegans about their respective beliefs. Check it out below if you’ve got a few minutes to waste:

Yeah, pretty inane stuff right? The thing that really worries me though is how this sv3rige guy literally has 60,000 followers who believe everything he says and is getting these guys who are half the world away to go out and do his ridiculous bidding. That’s a part of the internet I don’t think I ever wanted to go down and man is it terrifying.

This guy looks like he wants to start a fully fledged war against vegans and the way it’s going it looks like it might actually be a reality before long the way things are going. Scary.

For more of the same, check out sy3rige himself eating a raw pig’s head in front of some protesters. Ridiculous.