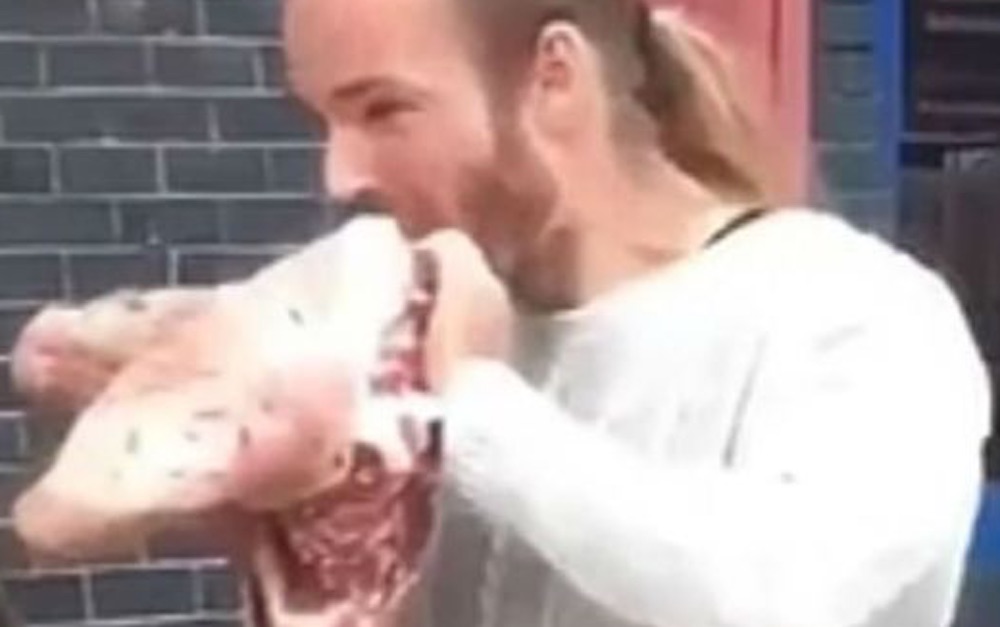 If there’s one thing that I still can’t really understand then it’s why people get so triggered and offended by vegans doing their thing – most of the time they’re just minding their own business in more of an ‘ethical’ manner than the rest of us – but people really do hate them and seem determined to offend them in any way that they can.

Case in point, this joker from Brighton who decided to protest against all the vegans coming together at VegFest 2019. Previously the organisers of the festival had released a statement saying that meat eaters weren’t comfortable seeing the faces of animals that they were eating, so one guy decided to call them out on this by showing up with a pig’s head and then eating it right in front of them.

Honestly, get a load of this:

What an absolute loser – I wonder if his mommy’s proud of him. Also kinda wondering if a pig’s face actually tastes nice but I suppose that’s beside the point here really. Looks freaking rank though from that video. A spokesman for the festival said the following;

We knew about the planned protest and were expecting 30 protesters.

Three turned up, which was slightly sad for them and reminiscent of a Nigel Farage march.

But they proceeded to upset kids and members of the public, and with that in mind, the police arrived, gave them a warning and sent them packing.

What was interesting was that we had meat eating members of the public saying that this revolting spectacle had encouraged them to give up eating meat – so it seems the anti vegan protest actually encouraged people to go vegan.

Sick Nigel Farage bantz. In all seriousness though, it is kinda lame that somebody hates vegans so much that they actually have to do something like this. Can’t get behind that at all even slightly. Can tell the guy is a massive loser too by the way he’s dressing – looks like he’s probably an incel.

For more of the same, here’s a restaurant owner eating a steak in front of a bunch of vegan protesters. Looks kinda tame after what this guy did though.