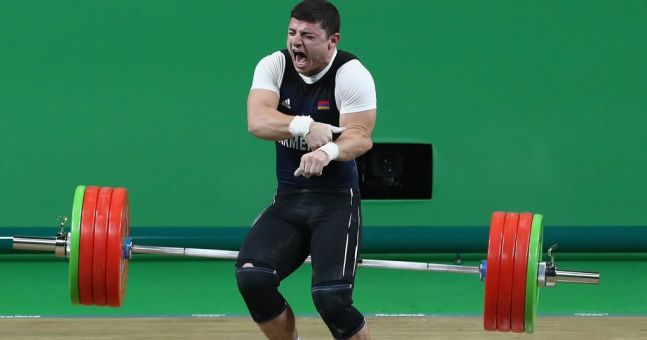 He was hopeful of a medal.

The Rio Olympics kicked off last week and we’ve already seen some absolutely excellent moments of sporting history being made, but we’ve also sadly had to see a couple of absolutely horrific injuries.

Up next on that list is Armenian power lifter Andranik Karapetyan. Andranik was hoping to medal at the games as he’s the current European champion, but his hopes went down the drain when he was trying to perform a 195kg clean and jerk.

As he raised the bar above his head to complete the rep, his left arm gave way under the pressure and seems to completely snap backwards a way it definitely shouldn’t be going:

Geez. That should no way look like that – it looks particularly awful at the end when he’s walking around and it’s just jutting out like it shouldn’t be there at all.

Obviously Andranik’s Olympic games were over and the medals went to Kazakhstan’s Nijat Rahimov took gold, with China’s Lu Xiaojun and Mohamed Ihab Youssef of Egypt respectively. We wish him well on the road to recovery, and hope he comes back to smash the next Olympics. What a story that would be.

In case you missed it, here’s an absolutely sickening cycle crash from earlier in the games.