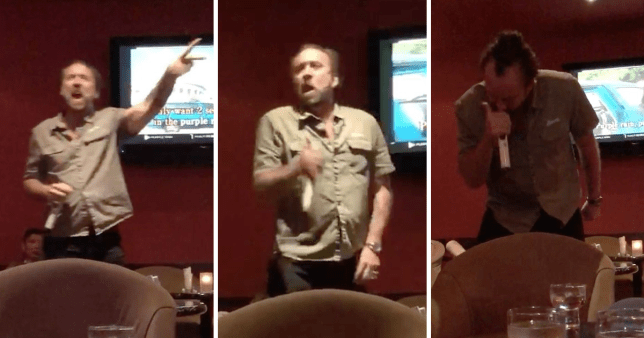 Cage is not in a good way.

It seems like Nicolas Cage is currently in the midst of a real life meltdown that’s comparable to any number of his and scenes like the video below are going to do nothing to dispel this idea.

Things started to go a bit west for Cage about a month or so ago where he was spotted heavily intoxicated with his current (at the time) girlfriend Erika Koike in a Las Vegas wedding chapel. This was on a Saturday night, and by Wednesday Cage had already filed for an annulment from her, claiming that she had tricked him into marrying him with a copious amount of alcohol.

As you can imagine, it doesn’t sound like Cage is in the best place right now – his net worth has also plummeted from $150 million in his hayday to $25 million currently – and so it looks as if he did what everyone did when they have a really bad day: get absolutely slaughtered and rent a karaoke booth to scream your favourite songs. Here he is singing Purple Rain in the style of his character from Bad Lieutenant:

Whoa. What was all that about eh? Sounded kinda weird, like everyone in the room was singing the song along with him or that they just left the original vocal on over the top of it as well. I guess when he was just screaming and going mental though then there wasn’t much point in listening to his gruff shouting because it sounded like your little brother’s first hardcore band.

Hope Nic gets better and gets himself out of this rut, although the way it’s going I’ve got a feeling that we’re gonna see a bit more than this. Totally into it to be honest, but just hope he ends up being OK.