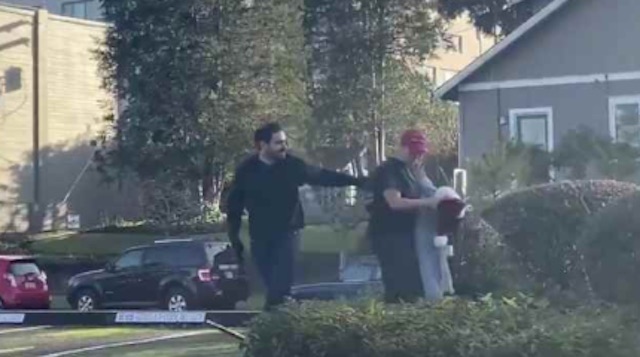 Things still haven’t calmed down over in the states.

We haven’t been focussing that much on America in the past month or so as we’re concentrating more on Brexit/Coronavirus over here and are just assuming that everything has returned to some semblance of normality now that Biden has been elected President, but it turns out that this isn’t the case and there’s still batshit crazy stuff going on all the time.

This latest video comes from the city of Olimpia in Washington state, where MAGA protesters have gathered on the Capitol campus every weekend since the election to protest the results. There are regular skirmishes between the MAGA boys and the ANTIFA lads, but things escalated this weekend where a MAGA protester straight up shot an ANITFA guy for getting his face:

I mean you can’t really see what’s going on there, but someone did end up getting shot and two arrests were made. The victim was hospitalised but is OK now, so there’s that at least.

Anyway, this video does show a minority of people out there protesting compared to some of the crowds we’ve seen in the past, but even so it’s kind of worrying that stuff like this is going on over in America still. From the reports that I’m reading, it seems like the ANTIFA counter protesters weren’t exactly helping things by throwing stuff at the MAGA guys and pushing them back from the Capitol so they couldn’t even carry out their protest and I guess you have to question whether this is a good thing or not?

Sure I don’t like the MAGA crew and what they’re protesting is objectively stupid, but they have got a right to protest and when you deny that with violence then surely you’re no better than them in the first place? Violence only leads to more violence as well, and then someone ends up getting shot too. It’s not the right way to be doing things and just shows that we’ve still got a long way to go. Be better.

For more of the same, check out this video of the Proud Boys attacking a couple in Washington D.C. Seems like this kind of stuff is still sadly prevalent.