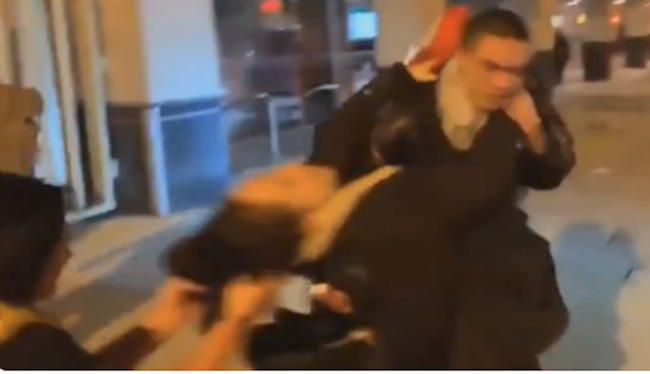 This isn’t a good look.

We haven’t really been paying much attention to what’s been going on in America in the last couple of weeks with Coronavirus cases on the rise and all the Brexit uncertainty, but it turns out that things haven’t got much better over there since Biden was confirmed as President – at least judging by the video below.

We don’t have a lot of context for the video but we’re being told that it’s from a ‘Stop The Steal’ march in Washington D.C. over the weekend and it seems like the couple that are being attacked by Proud Boys are definitely non combative and aren’t looking for a fight. They pretty much spend the whole video trying to get away from the Proud Boys, who relentlessly mock and attack them, so even if you find out that they were doing something before the video started to incite them I don’t think you can really justify this kind of behaviour.

Take a look at it yourself and see what you think:

This is #TrumpsAmerica
Proud boys ruthlessly breathing a non-combative couple at a “Stop the Steal” playdate in Washington DC. pic.twitter.com/EkvkobR8Ih

Yeah that definitely doesn’t make the Proud Boys look good does it? Some people have even compared it to Nazi Germany and other fascist regimes. At least that kind of stuff isn’t happening on the reg in the UK just yet. Probably won’t be long though given the way we’re going.

For more of the same, check out this Proud Boys initiation ceremony. One of the lamest things I’ve ever seen.