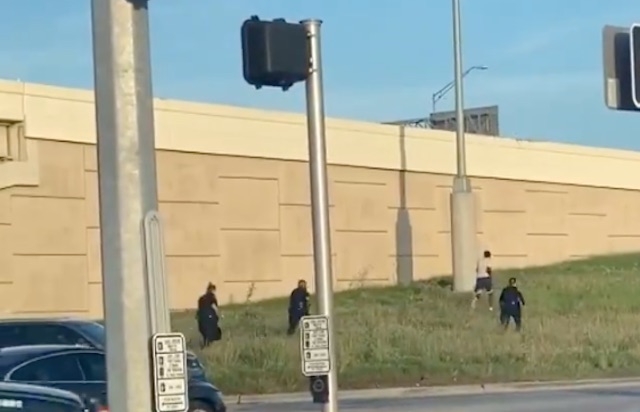 Literally everyone gives up.

I think that whenever we think of police chases we tend to imagine that they’re really dramatic high paced affairs after watching years of them like that in TV shows and movies, but it turns out that the reality might actually be slightly different – at least if the video below is anything to go by.

The clip comes from a police chase in Dallas that is apparently going down at 8am in the morning when loads of people are on their way to work. The perp is running away with three officers in pursuit before he heads up a grassy hill by the side of the highway and it all kind of peters out to the point that by the end of the clip all four people involved are just sort of walking up the hill in one of the slowest pursuits I think I’ve ever seen:

Those 8am chases are TUFF pic.twitter.com/yvumEpVeXO

Lol that is funny isn’t it? I think the dumbest thing about it is that the hill doesn’t even look that steep, although sometimes these things can be deceptive sure. Kinda crazy that not one of the police officers keeps running considering the guy is almost certainly going to head out onto the highway and cause all manner of chaos, but I guess we all know about how useless and corrupt the cops are in the United States after the last couple of years.

For more of the same, check out this guy leading police on a high speed chase whilst teaching his dog to drive. No, that isn’t a typo.