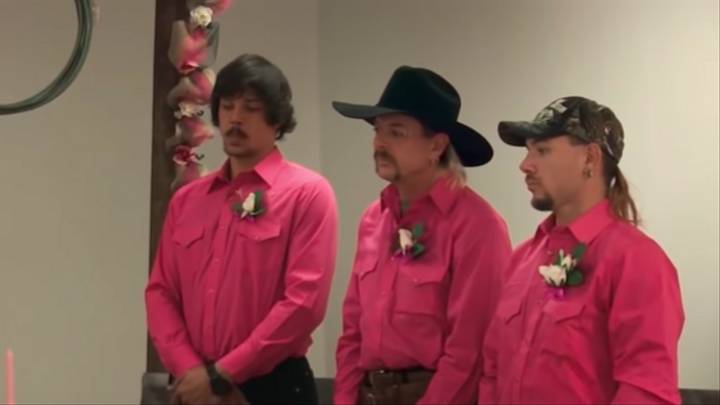 Another day, another ‘Tiger King’ story.

After the disappointment of Netflix’s extra episode – why was Joel McHale making all those dumb jokes all the way through it? – someone has decided to track down the full video from Joe Exotic’s wedding to Travis and John and share it with the world. The video follows the narrative of the traditional wedding video by watching everyone getting ready, followed by them saying their vows and then dancing around and partying.

Doesn’t sound that exciting but they you factor in that it’s Joe Exotic and it’s being produced for Joe Exotic TV and you know that you’re in for a doozy. At 22 minutes long during quarantine as well, what have got to do instead?

Jesus that was something else wasn’t it? Really shows how budget and rogue Joe Exotic TV was compared with the footage that we eventually saw on ‘Tiger King’ as well.

You can kinda understand why he didn’t get famous of of that stuff when this was the kind of crap he was producing as well. Also slightly sad when you realise what happened between the three of them when you see how kinda happy they look in this video and now you know they’re either dead or estranged and probably only agreed to go through with it all because of the meth. Gross.

For more of the same, check out this crazy conspiracy theory positing that Jeff Lowe is actually Carole Baskin’s first husband. Come on now.