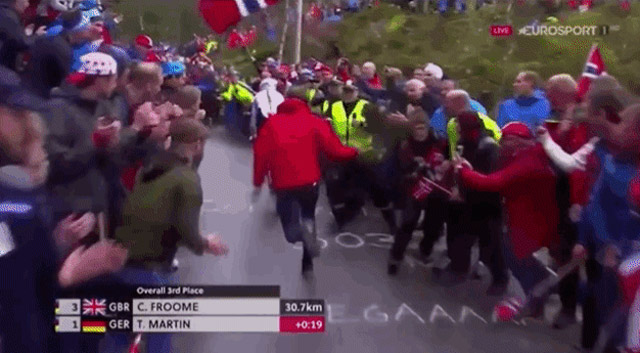 I don’t know much about the rules of watching competitive cycling live, but I would assume that it’s just not on to run after the cyclists when they’re in full flow, especially if they’re having a pretty hard time going up a mountain or whatever.

Unfortunately not everyone is as courteous as me and that’s why big cycling races have to employ massive security guards to deal with dickheads like the dude in the video below. It’s over at some race in Bergen, Norway and to say the guy gets obliterated by the security guards would be an understatement.

There’s literally no way that you’re only watching this once because it is that good. Trust me:

OK, own up – how many times did you watch it? I’m on about my seventh. Just love the way the guard comes out all causal and just clotheslines him to the floor.

Kinda wonder what the point of all the other security guards is though if they’re not actually gonna stop the guy? Money for nothing I guess – you can’t complain.

For more security guards knocking people out, check out Lil Wayne’s personal bodyguard knocking a fan out for the pettiest reason ever. Not cool.