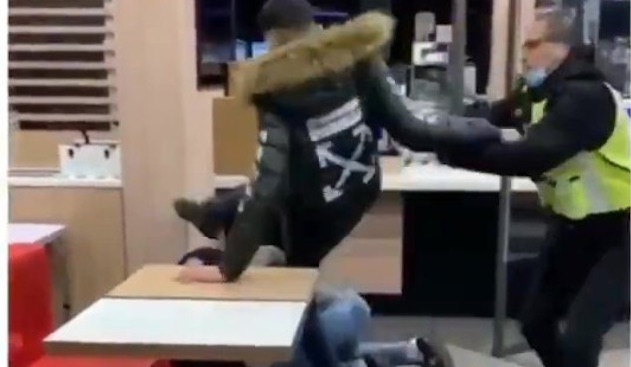 Sometimes you’re tanked at the end of the night and really need a McDonald’s, but I don’t think anyone is ever condoning getting in a fight with the security guard after you’ve finished your Big Mac.

Sadly though, this is exactly what went down at a location in Canning Town, London over the weekend where a guy was filmed getting into a massive brawl with security and pretty much getting his ass kicked. Check out the footage below:

Geez that’s just kind of embarrassing from the guy fighting, especially considering the security guard kinda looks like he’s a bit wet behind the ears. You don’t really see the connection either but it looks like a massively disgusting head kick on the guy on the floor from him as well. Kind of a scumbag move, but I suppose that’s inevitable when you’re fighting a McDonald’s security guard on a Saturday night isn’t it?

For more of the same, check out when some McDonald’s staff kicked the absolute life out of a customer who tried to fight them. Don’t mess, clearly.