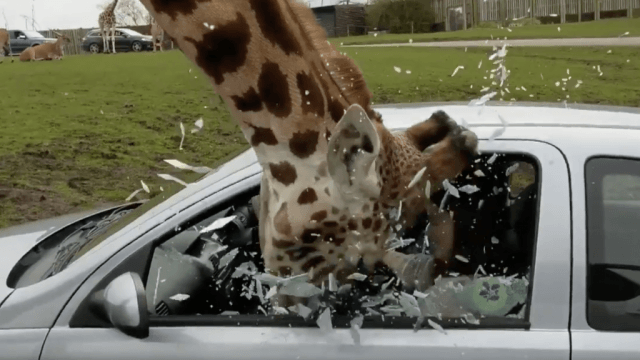 Usually when you go around a safari park, one of the best parts is putting your windows down and feeding some of the more friendly animals as they poke their head in and see what’s going on, but for one couple that part ended in a bit of a disaster over the weekend.

The pair were visiting West Midlands Safari Park when they came across a giraffe sticking its head into their car. The couple must have got freaked out by their purple tongues because instead of just petting them and hanging out, they instead decided to pull the windows which resulted in them breaking and smashing all over the giraffe’s head.

Pretty ridiculous scenes to be honest:

This is the moment a giraffe has a window smashed on its head at West Midlands Safari Park.

The animal, named Strider, leaned into the car when the window rolled up.
The park say the animal was not injured and are investigating. https://t.co/t4OgfwmXsN
Credit: YouTube: MoMedia pic.twitter.com/LTgxlxrDXh

Damn. Fortunately, the giraffe – whose name is Strider – was apparently not hurt, despite all that glass being smashed all over his face. The safari park have said they’re ‘investigating’ the incident but I’m not really sure what there is to investigate as it seems pretty clear what’s happening in the video and I’m not really sure that they can fine or punish those people for being so stupid and breaking the window on the giraffe. I guess we’ll find out soon.

For more giraffes, check out this bizarre animated video of some giraffes doing the high dive for fun. Really weird.