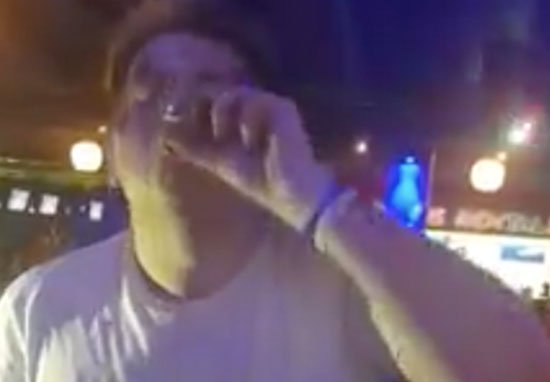 Everyone reading this who isn’t straight edge/tee total probably thinks that they’re pretty awesome at drinking and can hold their own with the lads on a night out, but this video is going to serve as a wake up call to you.

The video depicts what can only be described as an absolute mega lad named Chris McAdam over in Zante in Greece in some bar called Players downing 30 shots of sambuca in under a minute. Seriously I can’t believe this guy can even stomach this shit – he must have no gag reflex whatsoever or something:

Wow. To be fair I can’t really blame him for wanting to get wasted because it looks like it’s completely crap in Players as it’s literally empty, but even so I think 30 shots is a bit excessive.

I mean even if it is some low percentage knock off sambuca it’s still gonna get you completely wrecked. Would hate to see the state of this guy twenty minutes after this but still fair play – there’s no way I could ever handle that many shots even if it was over a two week period or something.

For more of the same, check out this story about a guy who did 75 shots of sambuca. It didn’t end well.