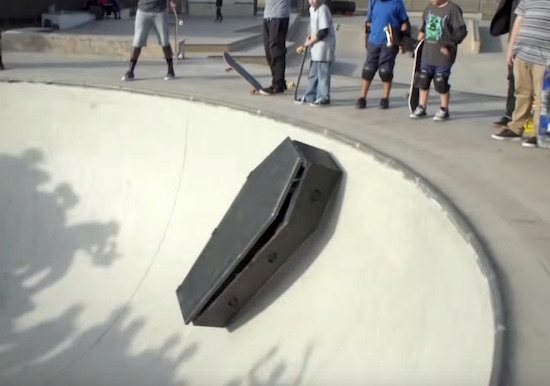 It’s well documented that Bam Margera has had a pretty hard time of it since the heyday of Jackass, but in recent times it looks as though he’s made some progress into returning as his old fun loving self.

This can be seen to some extent in the video below which features a preview of his appearance on Thrasher’s King Of The Road 3. Bam looks decidedly happy as he joins his old Element skate team for a bunch of skating and dumb hijinks which culminates in him 69ering some random dude in a coffin as it’s thrown into an empty pool:

Yeah, pretty much like Jackass has never been gone huh? The episode aired on Viceland last night so you can probably find it online somewhere if you’re desperate to see how the rest of this episode played out but I think you’ve probably seen the best part above.

All the best to Bam in the future and hope we continue to see that smile on his face and see some great content about him on the site. Certainly better than anything like this, that’s for sure.