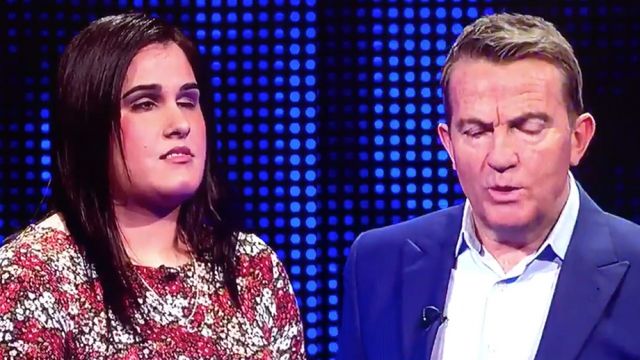 Viewers are calling it the greatest moment in its history.

The Chase has been a favourite in the after school/work slot on television for a hell of a long time now and with good reason – it’s a simple yet addictive quiz show that you just can’t help but be sucked in by when you tune in.

Normally the formula of the show is fairly consistent in that the team end up looking like they’re going to do well but getting pretty much raped by the Chaser, but there was an absolutely bizarre and baffling sequence of events the other day that really shook the people watching at home up. It happened when Charan, a technology teacher for those with sight-impairment, was competing in the cash building round and well, it’s probably better if I don’t spoil it and you just watch it for yourself:

Wow. What the hell is going on there? I can appreciate that it’s probably a lot more difficult in the studio answering the questions then simply sitting on your couch shouting the answers at the television, but she wasn’t even listening to most of the questions before she passed on them. That’s a brain fart of truly epic proportions so I suppose it’s no wonder that people are calling this sequence the greatest moment in the show’s history. Probably going to be replayed for years and years all over the internet as a meme no doubt.

For more absolute brain farts, check out this guy who was running for President when he decided to have a brain fart. Awkward.