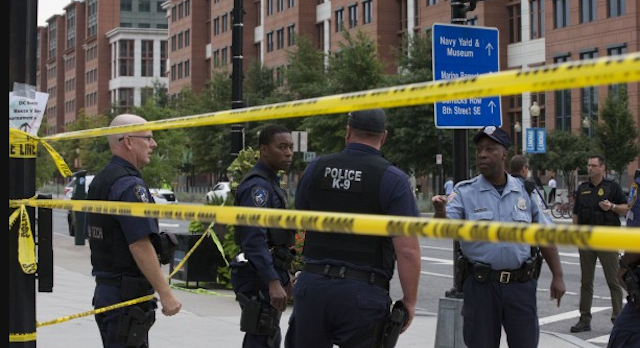 Several deaths have been reported at the Washington Navy Ship Yard after a disgruntled former employee went on a rampage with a semi automatic weapon there.

Details about this are pretty sketchy at the moment but we’ll bring you what we know and try and update you as the day progresses. Basically at around 8:20 a.m this morning there was an incident at the Washington Navy Yard and at least ten people were shot (some outlets are saying 12), two of which were law enforcement agents. At least four of these have died although some outlets are saying it’s actually six. Again, details are sketchy.

There are varying reports going around about who was doing the shooting, with various media outlets reporting that there could have been up to three shooters, but as of now it seems as though there is definitely one confirmed shooter – who is apparently dead now – and there is the possibility that there might be two other ‘potential’ shooters on the loose. I’m not really sure what that means but it doesn’t sound that good – I’m guessing that they were involved but didn’t actually fire any shots, yet have the potential to do so. If you’re in Washington and reading this police have offered the following description of them:

‘One is a white male wearing a khaki military uniform, short sleeves and a beret, who was last seen with a handgun. The other is a black male, 50, with an olive military-style uniform who may been in possession of a long gun.’

CBS and ABC have just reported that the dead shooter was a former Navy Yard employee who was in his 50s whose work status had just changed and that he was firing from a fourth floor window out onto the shipyard cafeteria below him with a semi automatic  It’s fairly easy to speculate over his reasons for shooting the place up given this but as it’s the only information that has been released so far it’s probably better to keep a lid on it until we actually do know some facts. Whatever the guy’s reasons I don’t think there could be anything that would justify going into his place of (former?) employment and shooting it up.

Apparently there is currently no evidence of a second shooter but this could all change as that tends to happen a lot in these incidents. We’ll post up a real story covering this when we find out more details about it but needless to say, regardless of what facts eventually do come out this completely sucks and our thoughts are with all those affected.

â˜› Something Lighter: Idiot Waits In Line For iPhone 5 For No Reason