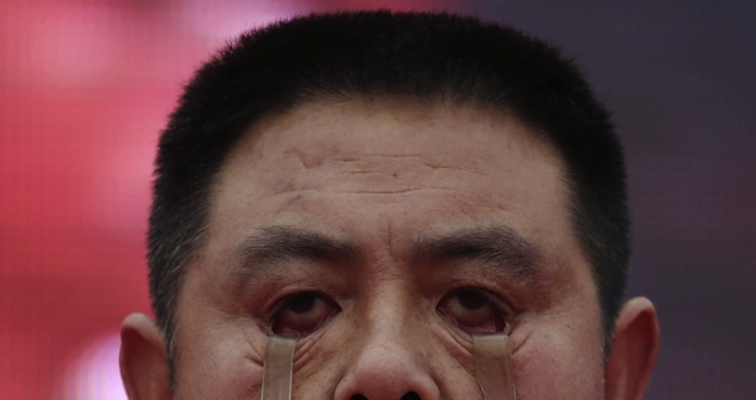 If you don’t know what a Chinese Eyelid Weightlifter is, then take a guess. You’re probably right and yeah, it looks pretty horrific. Check out some pictures in here.

Weightlifting is pretty cool I guess. I mean everyone goes to the gym and works out, at least when you get older because otherwise you’ll just get real fat like Quentin Tarantino only you won’t be able to score any chicks because you’re not Quentin Tarantino, you’re just some fatass loser working in McDonald’s. And weights are real great for keeping yourself trimand they’re also pretty great if you want to stack on loads of muscle, like my pal Postle who we call the muscleman because he’s like one of the most stacked guys any of us have ever met. It’s also a pretty cool Olympic sport to watch as it’s really intense and the contestants scream really hard when they lift up the weights and sometimes they just buckle and drop them. In short, weightlifting is kinda cool but not like completely awesome or anything.

This form of weightlifting is completely ridiculous though and also completely nonsensical. This dude Wang XianXiang is a 42 year old fireworks maker from the Hunan province in China and he is one crazy mofo because in his spare time he likes to hang weights from his eyelids. That’s right, instead of working out in the traditional manner Wany XianXiang prefers to work out his eyelids. I have no idea why he would even want to do this aside from maybe becoming a famous freak because surely there are absolutely no benefits to it whatsoever? It’s not gonna make you look good, it’s not gonna help you lose weight and I don’t think you can’t even enter a competition for it because I doubt any seriously exist.

Wang XianXiang has offered no explanation for his behaviour although he did perform at some festival in his hometown over the weekend where he hung buckets of water weighing five pounds from each of his eyelids  for about five minutes and presumably got a round of applause which probably made all his efforts worthwhile. And let’s be serious, there is a lot of effort involved in this activity as XianXiang trains for half an hour in the morning before he goes to work making fireworks and then for two hours after he gets home from making fireworks. That’s some real dedication there guys. I’m not sure what exactly he does to train and how exactly he hasn’t ripped his eyelids off yet but sure, way to go guy.

Wang himself says that he’s really stoked that after all this training he can currently hold five pounds on each eyelid but wants to push that value up to 11 pounds. Why? I’ve got no idea, presumably so he can go to more festivals and perform and everyone can rejoice in what a freaking weirdo he is. Here’s a couple of pictures of him that are pretty distrubing, especially the way he has some huge hooks in his eyelids. I mean how the hell does he apply those to his eyelids without serious danger to his eyes? And how do they stretch like that, are they always that stretched or do they just bounce back when he isn’t lifting weights on them? Again, I tried and failed to find a video of him in action and it seems like only these pictures are available, but if anyone has any info about that fire it over because we would love to find out.

In the meantime enjoy this pictures but maybe don’t look if you’re squeamish. Although you did already click on this article so chances are you can probably take it: 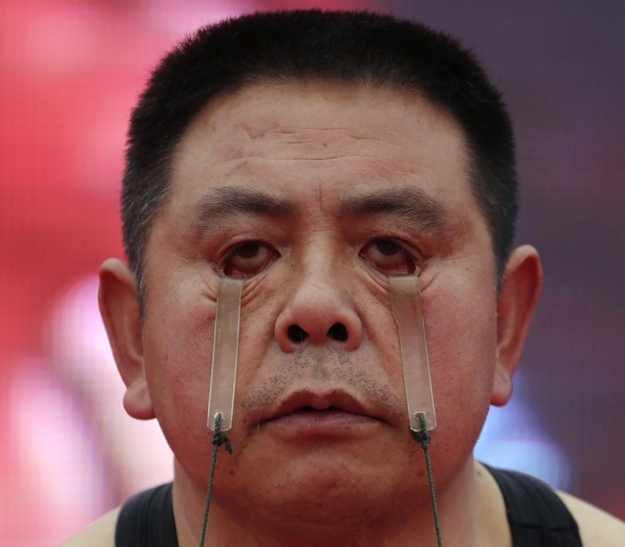 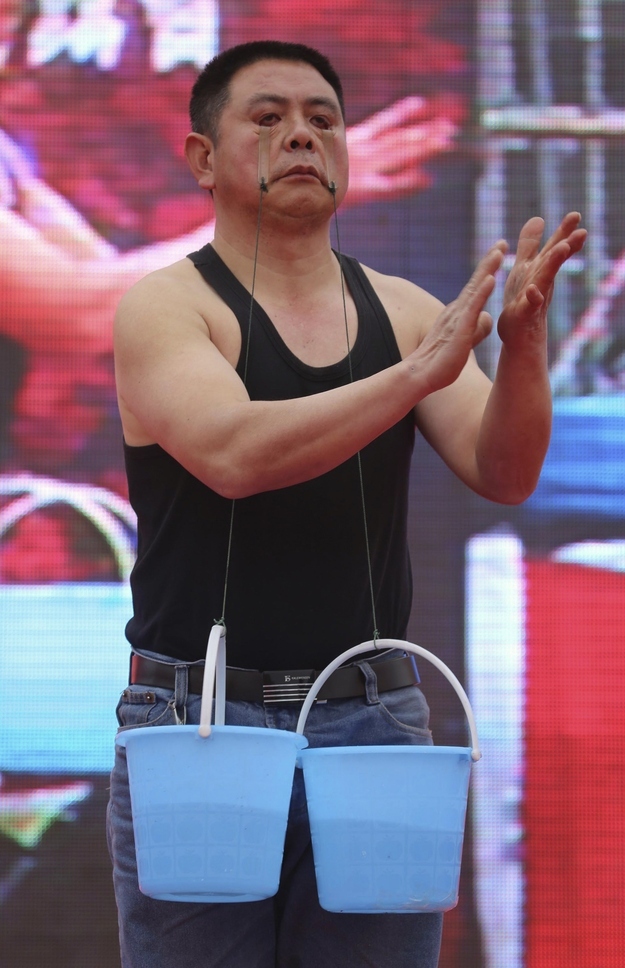