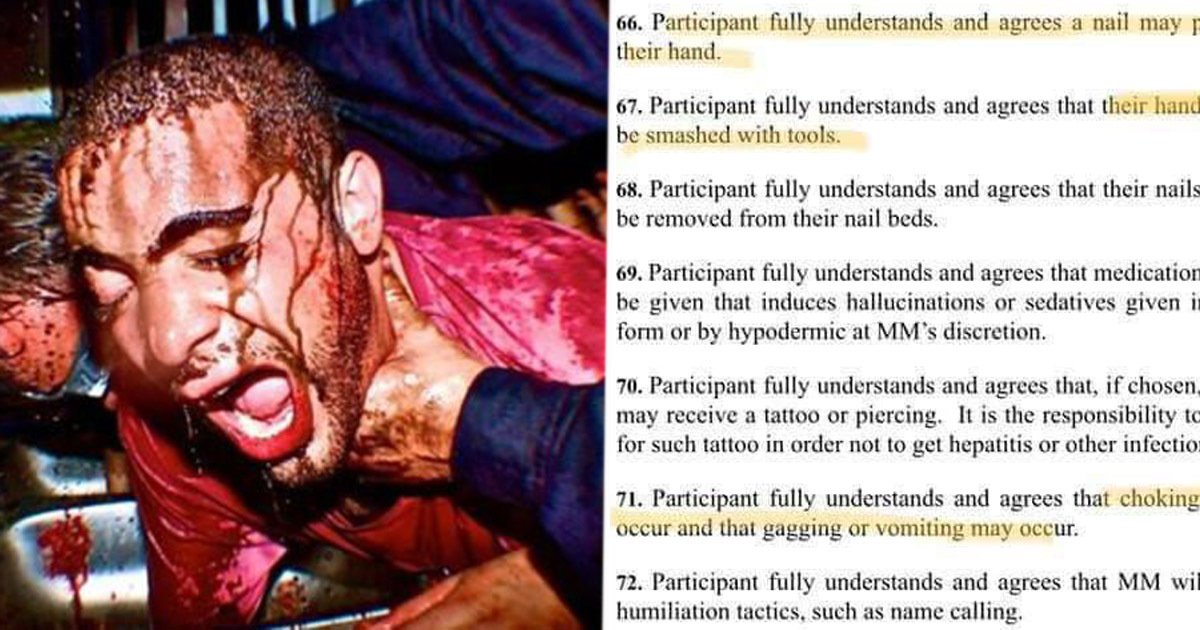 You literally consent to the actors torturing you.

We posted some clips from the most extreme haunted house in the world McKamey Manor last week and we thought that it looked like a completely brutal and horrific experience from this alone, but it turns out that the truth might be even more awful than we ever could have imagined.

We’re thinking this because someone posted the actual waiver that you have to sign to be allowed to enter the manor – in addition to signing it you’ll also need to have undergone a sports fitness test and also have a doctor’s note, a safe word, proof of medical insurance and a background check – and man does it sound messed up. You literally consent to getting your hand smashed in with tools, getting nails slammed into your hand, having your fingernails ripped off, being choked so hard that you puke and also being given hallucinogenic drugs to further mess you up as part of the experience.

In addition to this, someone also left a comment on the original Facebook post that was posted by Bethany McPherson saying that the guy behind it – Russ McKamay –  literally hired previously convicted rapists and murderers to help him live out his depraved torture fantasies. Here’s the full post:

Jesus that sounds completely and utterly rank doesn’t it? I guess people want to take part in it to win the £15,000 prize and prove that they’re the baddest badass out there, but I honestly don’t think that they’ll let anyone win, ever. They’ll just keep punishing you until they break you and judging by how many people have already failed and come away shells of their former selves, I really don’t think it’s worth it. Don’t bother.

Not sure if the place deserves to be closed down because people are well up for trying to beat it and are consenting to doing it in the first place, but I do think people probably don’t realise what they’re letting themselves in for despite it being really quite obviously horrific. McKamay is clearly some kind of weirdo and it’s crazy that he can get away with this, but the fact is people want to do it and are giving their consent so I’m not really sure how people can really feel justified in complaining about it. Just a strange strange situation.

For more of the same, check out this video from McKamay Manor. All kinds of screwed up.