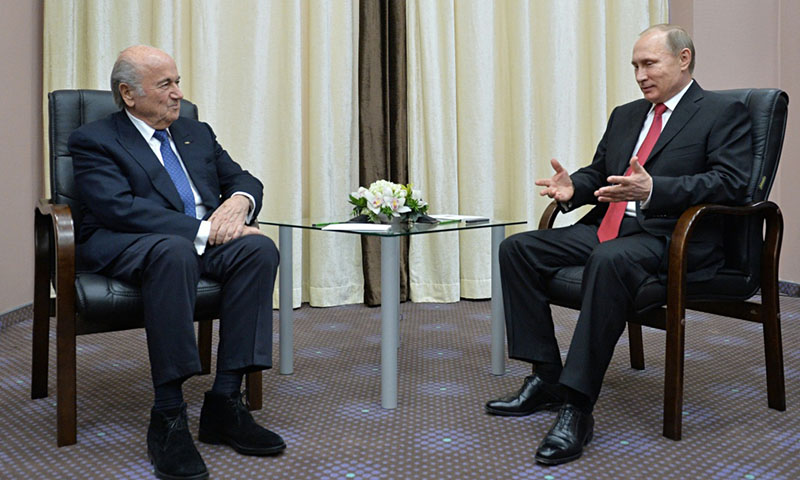 Could WWIII be fought over… football?

Oh my days — could this whole FIFA corruption mess turn out to be the catalyst for World War 3? Could the world completely crumble once more, all because of football? Yeah, probably not. But still — Putin has a bone to pick and that’s never good news.

This is yet another blatant attempt [by the United States] to extend its jurisdiction to other states.

It looks very strange, the arrests are carried out on the request of the USA side. They are accused of corruption — who is? International officials. I suppose that someone broke some rules, I don’t know. But definitely, it’s got nothing to do with the USA. Those officials are not US citizens. If something happened it was not in the US and it’s nothing to do with them. The latest news and updates on the crisis at Fifa, where Sepp Blatter is under increasing pressure to step down.

It’s another clear attempt by the USA to spread its jurisdiction to other states. And I have no doubt — it’s a clear attempt not to allow Mr Blatter to be re-elected as president of Fifa, which is a great violation of the operating principles of international organisations. The US prosecutor, as our media report, has already said that those Fifa officials have committed a crime. As if the prosecutor didn’t know about the principle of the presumption of innocence.

He made it perfectly clear that the Swiss have Russia’s backing.

Obviously it’s great that all these corrupt officials have to finally face up to their actions, not to mention the fact that thanks to these arrests England are now odds-on favourites to host the 2018 World Cup, but in a way Putin has a point — this is none of America’s business. Haven’t they got their own problems to deal with without getting involved in the FIFA scandal, of all things? Just because they did pretty well in the last World Cup I guess they think they know everything about football now.

Come on though Vlad, we all know you’re not averse to the odd scandal yourself.