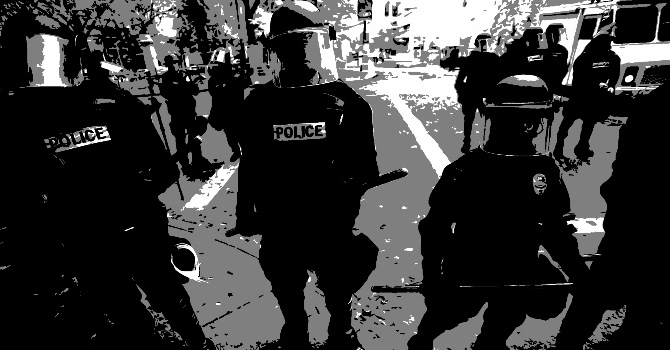 Police brutality has shown us that some cops are no better than those they call ‘criminals’. Here’s another example of the police worsening their reputation.

Is there anyone out there who actually likes/respects the cops? Okay, they’re not all bad, and it’s different if your missus/mister is a copper because you’re sorta forced to like them, then, because if you don’t like them you’ll be lying in bed with a stiff dick or a gaping gash and having no action at all. But, if you do like your shagging buddy – who’s a cop – then you’re bound to get laid all the time and develop a fetish over their baton penetrating your every orifice. My ex-neighbour used to be a cop but he took early retirement, I think he was only in his early 50’s at the time, and I’m pretty sure the crime-fighting-but-not-really life took a stranglehold over him in the later years as he became really withdrawn and would threaten to arrest me when he’d see me smoking one and hit me when he caught me sniffing his daughter’s knickers on his washing line. Wasn’t cool at all and he still doesn’t know who took his tires down.

We’ve all heard, read about and watched acts of police brutality (people with a badge of the ‘law’ who are supposedly responsible for the prevention and detection of illegal activities and for the upkeep of the order of the public, who turn that on its head and do whatever the fuck they want, including assaulting, maiming and even killing the public they’re supposed to look after) and even the smallest act of police brutality is pretty shocking to watch and can make you think twice about phoning or approaching a police officer once witnessed. There was a case in the G20 protest, which all of us (should) have heard about where a police officer pushed a man to the ground – which resulted in the man dying. Police officers like him are a disgrace to honest cops and it seems all they ever get afterwards is a slap on the wrist.

â˜› Show The Cops This: The Next Time A Copper Tells You To Stop Filming, Show Them This

So, here’s another example of crooked police using their powers to intimidate, unsettle and provoke a reaction from the public. It happened in DeKalb, Illinois. The police are banging on a wrong house but when they’re told they’re at the wrong address, they keep knocking relentlessly until they’re let in. Once in, they subject the residents to verbal and physical assault; including stealing $48 from a purse. Sadly, this is what some police feel they can do nowadays and it’s a shame that people like them are given the duty of protecting us from ‘criminals’ and ‘crime’ when, on evidence of this, they’re no better than the people they try to protect us from.