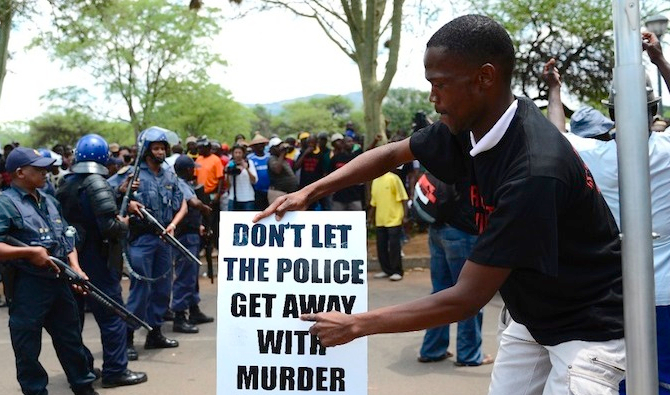 Think UK traffic wardens are bad? This guy in South Africa got dragged to prison while tied to the back of a police van, and was then beaten to death in his cell.

Think UK traffic wardens are bad? All this guy in South Africa did was park on the wrong side of the road, and he ended up being tied to the back of a police van and dragged 500m while a bunch of backwards idiots laughed and cheered, eventually being taken to a police station and beaten to death by the people who arrested him.

â˜› Read This Next: Is Being A Traffic Warden Worth Dying For?

It’s a pity we don’t see the start of the clip to really establish how the argument began and escalated. The bit we see is 27-year-old Mido Macia (a taxi driver) refusing to cooperate with police and refusing to get in the police van which — fair enough — warrants them being a bit strong handed with him. But instead of just being strong handed, they tie the guy to the back of the van and drag him across the earth, then eventually murder him in some shitty prison cell.

Even in South Africa, I’m sure the law is you have to give the guy a ticket and send him on his way. Still as we’ve seen recently with the Oscar Pistorious case the South African police is one big corrupt joke; the investigating officer on that case was himself facing seven murder charges, just casually going about his business as if that wasn’t going to come out into the open.

â˜› Thai Police: The Bangkok Hilton – A Near Escape

Say what you like about the British bobby, he’s a thousands times better than most of the paramilitary thugs disguised as policemen around the world. Next time you think it’s unfair that you got pulled over for driving in your hoody, or cautioned in the park for smoking a spliff, spare a thought for the people around the world living under the rule of uniformed savages.

â˜›  Watch This Next: This Is How Romanian Special Forces Get It Done

Check out the messed up video below: