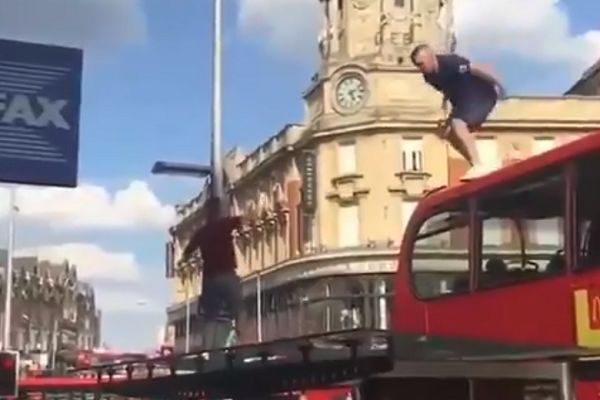 The whole nation was united in celebrating England’s dominant 2-0 win over Sweden on Saturday and this being England it meant that the collective decided to do what the English do best and get completely and utterly hammered.

Whilst this meant that there were a record number of police incidents reported, for the most part everyone was cool and just sang around and danced and had a good time. One area where people tried to make this happen but it didn’t quite go to plan though was in Clapham, South London where a couple of England fans somehow managed to get on top of a bus shelter and double decker bus and led the people in the streets in a rendition of the famous Icelandic thunder clap for some reason.

Anyway that was all well and good and pretty fun, but things really went to another level when one of the dude’s tried to get down from the bus by jumping on top of the bus shelter. You can guess how this is going to end:

Glad someone caught it from the other side! pic.twitter.com/fc3fMPZiYE

OK so he probably didn’t mean to go through it and you would probably think that the top of a bus shelter could probably take your weight, but it looks like it can’t. So if you’re ever in that position then don’t do what that guy ended up doing, OK?

It looked like he wasn’t too badly hurt though so that’s cool, just a shame that he ended up destroying public property. At least he didn’t smash up an ambulance like some of the other pricks out there though.

For more of the same, check out this England fan brutally trolling his wife during his wedding speech. Classic.