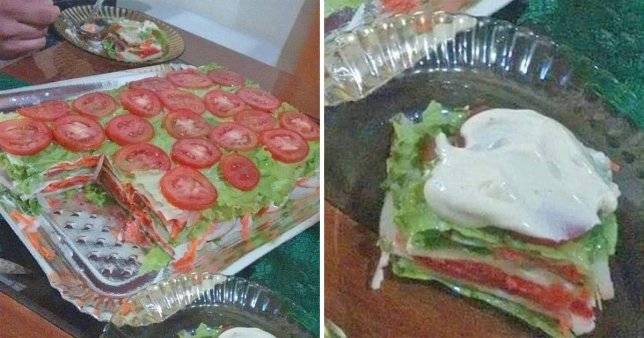 You don’t make friends with salad.

Whether you’re a meat-eater, vegan, vegetarian, pescatarian, or whatever-you-want-arian, I think we can all agree that NO ONE should be allowed to serve up a salad and called it “lasagna”.

A woman who committed this food blasphemy has been blasted after her co-worker shared a picture of the dish, along with the caption: “Coworker brought in vegan lasagna today and I’m ready to knock all that shit over.”

Coworker brought in vegan lasagna today and I’m ready to knock all that shit over. pic.twitter.com/eZWgkQNPWP

As are we. As you can see, it’s a very bland-looking salad with iceberg lettuce, tomato slices and what looks like some sort of tomato sauce, layered up in the same fashion as a lasagna would be. Only difference is, it’s missing all of the components that make it taste good – the meat, the cheese, the pasta.

The woman who served up this horrifying dish tried to mask the thing in some sort of creamy sauce, but people weren’t having it – no amount of vegan mayo could save this monstrosity.

The “lasagna” is so offensive, it’s even pissed off the vegan community, with many commenters pointing out that just because a dish doesn’t contain animal products doesn’t mean it has to be boring and disgusting. Here are just some of the comments made by the Twitter community: 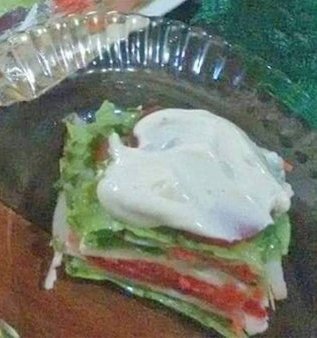 Vegan lasagne is delicious when it’s done right, it’s just regular lasagne with no meat or cheese. This mess looks like a tragedy.

Is your colleague actually vegan? Because this kinda looks like what a non-vegan thinks a vegan dish looks like.

Its called a salad, Karen. You brought a salad.

Yeah, fuck you Karen (or whatever your name is) and your salad – giving veggies a bad name by implying they only eat rabbit food. As was proven by this culinary faux pas, this is one dish that everyone can agree is completely and utterly unnecessary.

I think it might even top this girl’s meal as the worst vegan recipe ever made.