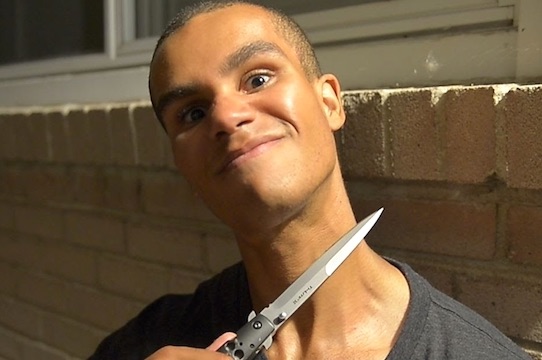 Vegans often get a bad rep on this page for the simple reason that the majority of them can’t go five minutes without explaining to you that they’re vegan and how your life choices are completely terrible compared to theirs. Not all vegans are like that, but unfortunately the ones that are kind of bring down the whole demographic for everyone else.

This guy is pretty much the epitome of that. His name is Richard Burgess but he calls himself ‘Vegan Gains’ because he’s a vegan bodybuilder. It seems like his schtick is going on video game live streams for interviews and being an absolute prick about being a vegan, with some of his favourite moves including getting a knife out and threatening to cut anyone who mistreats animals and to stomp kids to death.

Vegan Gains says it’s all to increase his views and it’s a ‘special sense of humour’, but when you watch this video of the top 10 death threats he’s made I’m not sure if you’ll be convinced by that line. I wasn’t:

OK so maybe the fact he’s vegan doesn’t have anything to do with the fact that he’s also a psychopath, but even so he isn’t doing the minority any favours by making these videos. He says he’s doing it all for views but I don’t think he’s a good enough actor to be so casual and convincing about everything he says.

Would put money on him killing someone soon to be honest. Whatever you do, you should probably never mention that story about the vegan that wanted to climb Mount Everest to prove vegans could do anything but instead ended up dying.