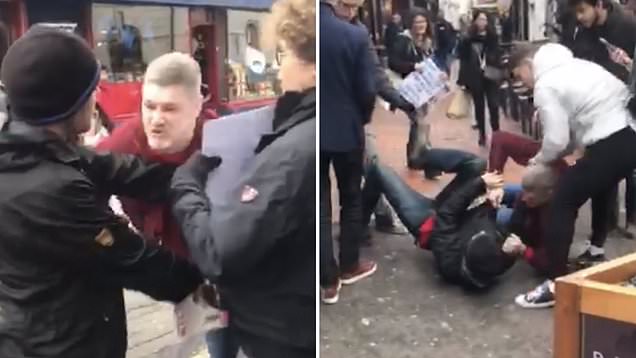 A newbie animals rights protester on his third protest was left with a bloody nose after being on the receiving end of a headbutt in Brighton this week.

Martin Shaw hooked up with fellow Brighton vegan activists outside Profile Fashion holding up signs like ‘Wear Your Own Skin’ and ‘It’s Not Fashion, It’s Violence’. One customer who was leaving the shop wasn’t happy about this and so decided to try and break Martin’s face:

Well apparently Martin was left bloodied but it seemed a bit of a failed headbutt to me considering the guy ended up falling flat on his face. Great job there. The attacker claims the protesters were in his way as he was coming out of the shop and that’s why he lashed out but I think we all know he just wanted to batter some vegans.

Out of nowhere he headbutted me. He pulled me to the floor. A member of the public thankfully managed to pull him off me.

It just shows that with the people who buy fur, they can be violent towards humans as well as animals.

Bit of mental gymnastics at play there to come to that generalisation but fair enough I guess. When life gives you lemons, make anti-fur buyer lemonade. Though let’s not forget we’ve got animal rights activists going around stabbing people for wearing fur coats also.

Credit to Martin – he decided not to press charges as he thinks shaming this guy by sending the video viral is enough. Let’s hope the attacker is humbled by Martin’s mercy and goes to some anger management therapy sessions or something.

To watch a vegan get punched in the face for ruining a family’s dinner at Pizza Express, click HERE. Also in Brighton.