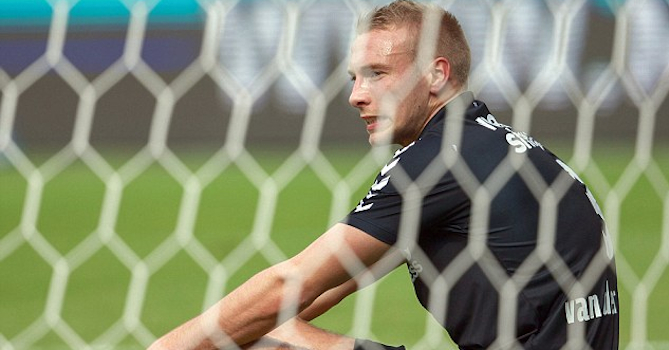 This guy is called Mike Van Der Hoorn and he plays for Utrecht over in Holland and he scored one of the dumbest own goals in history over the weekend. Check it out here.

I know I posted up that video of the worst penalty ever and I opened it with virtually exactly the same spiel as I’m opening this one i.e. a line about how I always say this is the dumbest own goal/penalty I’ve ever seen, and then about six months later an even dumber one comes out, but there really isn’t another way to open this article and it’s just kind of unfortunate (or fortunate, depends how you look at it) that that penalty and this own goal came around on literally the same day. I guess they’re like buses or something.

So yeah this went down in the Dutch league over the weekend and it is pretty laughably awesome. It happened in a match between AZ Alkmaar and Utrecht in which Utrecht ended up losing 6-0, with American striker Jozy Altidore putting three past them. If you remember Altidore from his stint at Hull City – where he scored something like 1 goal in 30 appearances – then you’ll probably have some idea of how bad Utrecht must be to get hammered 6-0 by a team in which he’s playing. But undoubtedly the worst player on the pitch that day must have been Mike Van Der Hoorn for his ridiculously stupid own goal.

To be fair the left back doesn’t exactly cover himself in glory with this one, as he allows the attacker to take the ball off him in the area while he hesitates and isn’t very decisive about what he’s doing at all. But when the ball falls to Mike Van Der Hoorn in the middle of the area with absolutely nobody pressuring him, he definitely should not do what he does. I don’t even know how he does it, it’s ridiculous.

Check out the video below and let us know if you think it’s as dumb as any of the own goals we’ve featured before:

â˜› Here Are Some Of The Other Contenders For Dumbest Own Goal Ever:

Best Own Goal Ever Scored

Top Three Russian Own Goals Of All Time