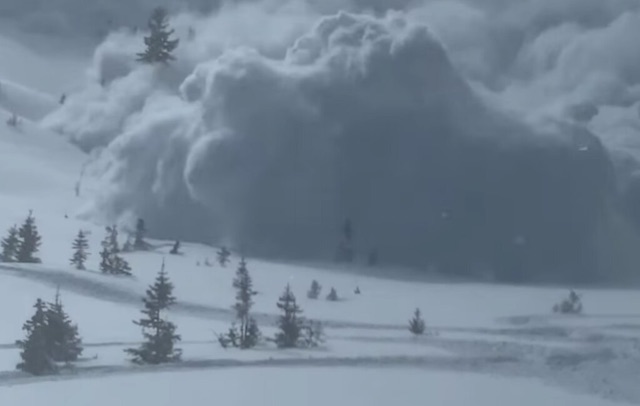 When it comes to disaster events, I don’t really think that avalanches get as much credit as they deserve because you never really hear about them, even though they must happen every now and again and completely screw everything up.

Maybe this might change slightly with the news that there were a major couple of avalanches over in Utah over the weekend, sadly resulting in the deaths of at least four people. RIP. Incredibly though, five other snow mobilers were caught in the avalanche and decided to film it instead of running away, even when it was coming straight at them and a rapid, rapid speed.

Not really sure what these guys were thinking, but I suppose they ended up surviving and getting a cool viral video out of it, so I guess they knew what they were doing after all. Take a look at it below, alongside the guy’s narrative of what happened:

Today we were riding in the uintahs, the snow was great up high and it was finally feeling like we had some base.

We had 3 other friends and one younger below in the flats.

The mountain shook and I thought it was an earthquake.

Then it hit me, avalanche. As I turned and looked up I could see the snow wave coming.

A second later the snow hit and the swimming started.

Somehow I only moved about 20 yards and stayed on top of the snow (MIRACLE).

We didn’t realize it but the avalanche had also triggered even bigger on the other side of trees where we were.

Our 2 other friends both got hit with the wave on the FLATS.

The cameraperson was buried to about his face and somehow was able to hold on to his phone.

Yeah, still can’t believe that the guy didn’t start hightailing it way before he did in that first video. They’re so lucky that they didn’t get wiped out or trapped completely. You can kinda laugh at that guy stuck in the snow at the end of the second video, but it really could have been so much worse for the guy. Avalanches seriously need to get more credit.

For more of the same, check out this terrifying video of a skier plunging into crevasse and getting covered in snow. Seriously messed up.