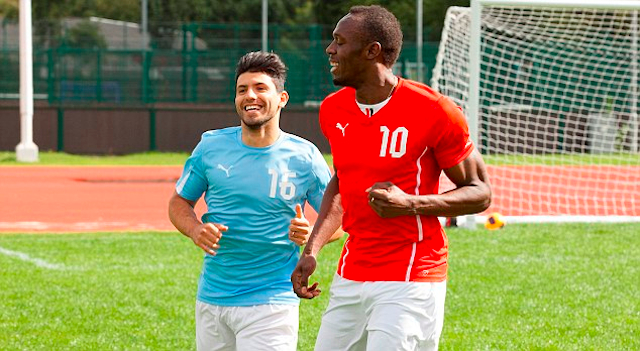 Ahead of the Manchester derby on Sunday, Usain Bolt agreed to take Sergio Aguero for a training session in order to make him faster – but all was not quite what it seemed.

Considering Usain Bolt is a massive Manchester United fan, the headline of this article might seem kind of weird because it implies that he would agree to train one of their biggest rivals to get better at football and this is exactly what he did – although when you watch the video you’ll see that all was not quite what it seemed. Turns out it was Bolt’s idea to try and tire Aguero out before the big Manchester derby on Sunday, but Aguero wasn’t having any of it and it didn’t seem like Bolt’s training session even phased him.

Aguero couldn’t resist having a sly dig at United as well after the training session saying that he doubted Bolt was good enough to get into Manchester City’s Starting XI but that he would fit right into Manchester United’s. Given how crap players like Tom Cleverley and Danny Welbeck are, he might have a point.

The training session was organised by PUMA to help promote their evoSPEED 1.2 football boots which are supposed to make you run faster or something.

â˜› More Usain Bolt: Is This The Best Picture Of Usain Bolt Ever Taken?