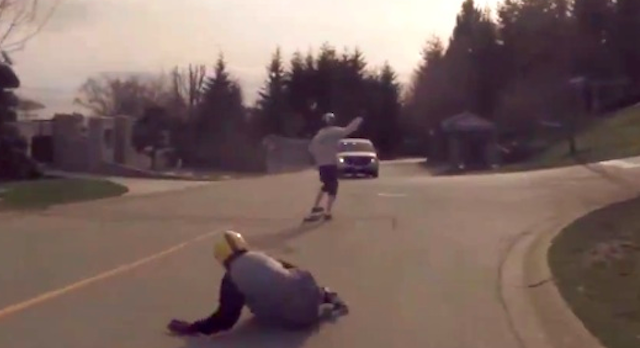 The cool thing about this video isn’t the crash, it’s how the long boarders completely chew out the cop afterwards and he has no retort at all.

No sooner do we announce a project to sponsor some kids longboarding across America, then this video emerges of a cop being a complete asshole to longboarders.

Fortunately, this happened in West Vancouver – which the kids won’t be going anywhere near – but it still highlights how attitudes aren’t exactly pro-longboarding in that part of the world. The kids aren’t really doing anything wrong in this video (although apparently it is illegal to longboard on this road, but I mean come on?!) but the cop is a complete asshole and instead of pulling them over like a normal cop might do, he swerves in front of them causing all three of them to crash. One of them even gets injured pretty badly, although you don’t see it in the video.

The crash isn’t the cool thing about this video though, it’s how awesome the longboarders are afterwards as they completely lay into the cop for being an asshole and you can tell that he knows he’s done something wrong by the pussy and wimpy answers he gives back to them. It’s about time someone stood up to asshole cops so fair play to these guys for doing so.

â˜› Get Involved: Longboarding Across The United States