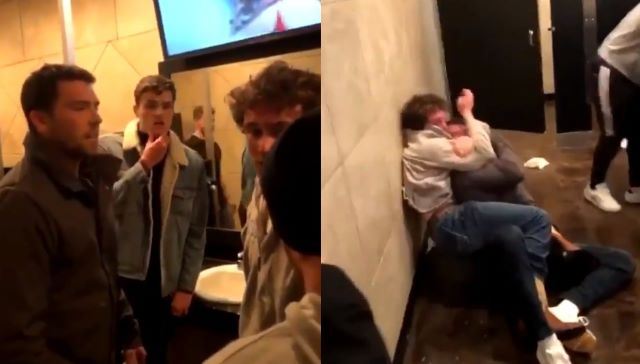 Over at the University of Oklahoma last week, a pair of football players got into a scrap with a pair of wrestlers in the piss-stained bathroom of campus bar Logies On The Corner, and, quite satisfyingly, it looks as though the instigators were the ones who came up short.

As always, the camera doesn’t catch the beginning of the confrontation, but it seems as though Round 1 ended with one of the wrestlers suffering a busted nose. Round 2 went more to plan for them:

Video clearly shows the “SUPERB KID” being a fucking bully and thinking he was about to steam roll a smaller guy.

As the Tweet suggests, one of the football players is an up-and-coming sports media darling named Spencer Jones, which is why this is being spun as him being the victim in all this. Indeed, he underwent a 4-hour facial reconstruction surgery after the fight and almost lost an eye.

One of the wrestlers has Tweeted his side of the story clarifying that the Ben Askren lookalike is his brother, and the pair of them are NOT students, but rather have been wrestling/MMA fighting since they were 12:

Just to get rid of the misconceptions, I’m the fellow in the beanie and that is my brother. We ARE NOT wrestlers at any university, we have been wrestling since we were in diapers and MMA/Cage Fighting since we were 12. They gave us no options unfortunately. We showed restraint.

Wow. Guess those two football players never really stood a chance. I think the video backs up his claims that he and his brother were showing restraint, but once the football players got physical with them, they had no choice but to go beast mode on them. What an ego killer for the losing side!

The best part for me was the brothers turning to each other at the start of the video and appearing to discuss whether they should finish these guys, and then doing so in rapid fashion. That’s brother goals right there.

For an amazing video of two high school students fighting in the bathroom while their mate takes a shit inches away from them, click HERE.