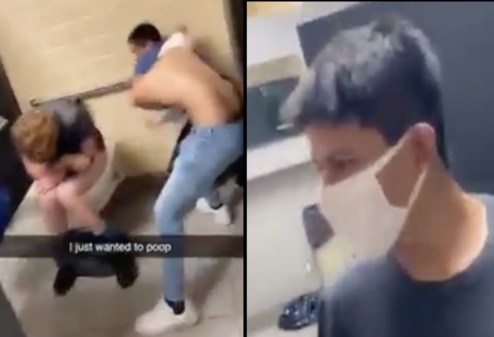 Pooping in public anywhere is terrifying, but just imagine being back in high school and having to poop in front of a whole bunch of dudes while two of your classmates beat the shit out of each other inches away from you.

Absolute nightmare material for the lad:

That’s peak vulnerability right there. Poor kid thought he had the handicapped stall all to himself and his two buddies come bursting in just pummeling each other to death while a group gathers around watching him squirm beside them.

All he could do was just sit there and wait until it was over: 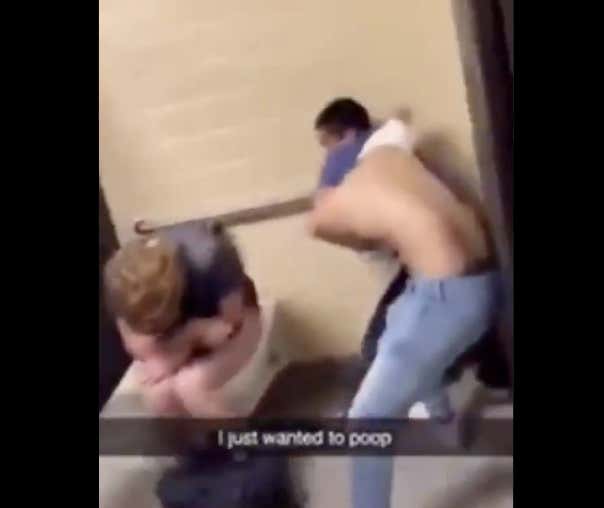 In fairness, what else could he have done? If he stands up his dick is on camera and on the internet forever, and if he yells at them to get out he just looks even more ridiculous (not that they would even listen). The only thing he could do was bury his head in his hands and just wait it out.

He did manage to pull his trousers up a little bit at the end of the video but you have to say by that point, the damage had already been done. Hopefully he was able to complete his shit in peace once those two boys were done fighting. How about locking the stall next time as well?

To watch a woman who was pulled over by police say “I have to poop so bad” and then speed off, click HERE.