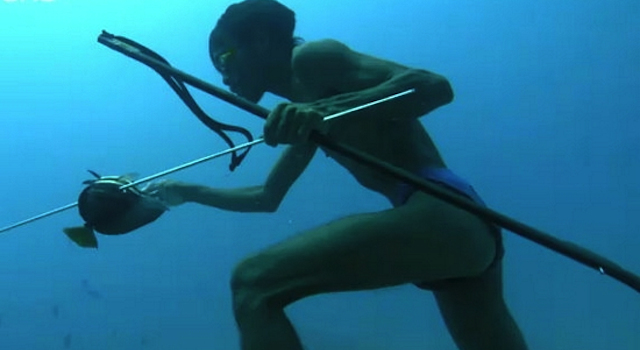 The Bajau tribe have manipulated their bodies so they can hold their breath for over five minutes.

The people of the Bajau tribe have manipulated their bodies so that they’re able to hold their breath for over five minutes whilst they sink to the bottom of the sea to hunt fish with a spear.

Sounds ridiculous? Well that’s because it probably is, but it’s actually happening as you’ll be able to see in the video below, where a tribesman descend 65 feet and then hunts around on the ocean floor for three minutes before he spears a fish and heads to the surface. Apparently he could have stayed down there even longer if he hadn’t managed to bag a fish in that time.

The Bajau tribe are completely weird to be fair though – they live in houseboats or on stilt houses off the coast in the ocean, and it’s said that because they spend so much time in the water that when they’re hanging out on dry land they get land sick. That isn’t the extent of their weirdness though – they actually intentionally burst their ear drums when they’re young to help them with their underwater diving as they know that they’ll be doing so much of it, that it makes sense to be slightly deaf rather than keep having them pop from the pressure of all the dives they do. The deepness and regularity of their dives also mean that their eye muscles get changed so that they can see better underwater.