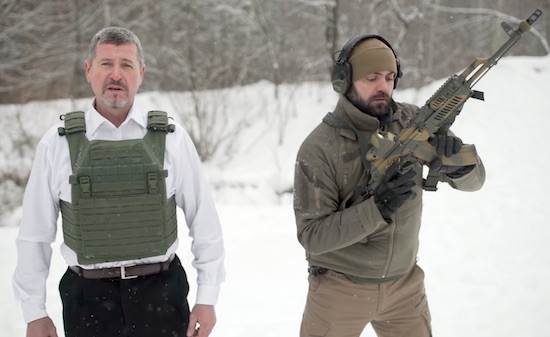 There’s one thing to absolutely rate your product and talk it up to everyone you meet in an effort make money from it, but it’s another thing entirely to have so much confidence in it that you’re willing to get shot in the chest with an AK47 to prove its worth.

This is exactly how confident this Ukrainian maniac is in the quality of his body armour though, as he’s willing to strap it on and let his buddy shoot him in the chest to show everyone how completely and utterly badass both he and the armour are. What an absolute psycho:

Damn, the guy didn’t even flinch. I guess he knows how good his armour is though and that’s why he allows stuff like this to happen. He must really trust the shooter too because I mean damn, if he missed the armour then he could end up getting shot or even worse possibly even dead.

Such a ballsy video in that respect, but I’m pretty much convinced that he’s selling the best armour in the business after watching it. Not that I’m really in the market for buying any armour right now, but I’ll be sure to contact him if it ever becomes an issue.

For more guns, check out this cocky gun instructor trying to act cool after accidentally firing a gun. You’re not fooling me pal.