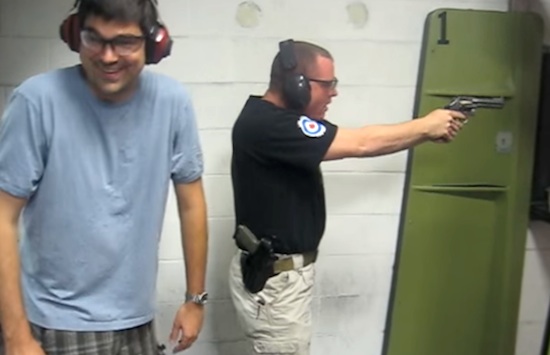 I’ve never really understood the American obsession with shooting guns, but if ever I was over there on a stag do then I would probably have to end up doing it. If that happened, I would really want an instructor who knew what he was doing and didn’t accidentally fire his gun off when he wasn’t paying attention.

Unfortunately for these eager learners, they were handed that exact instructor. Regardless of his cock up, you’ve gotta give this guy props because even though he fucked up pretty hard, he styled it out like an absolute champ and didn’t even break a sweat. Nothing to see here boys, all part of the show:

That’s how you handle it boys. The guy was probably bricking it on the inside and will be extra careful on his next few demonstrations. At least I hope so – it could all have been part of the show after all because he does come across like a complete jock asshole as well. Only time will tell I suppose.

For more on guns, check out this dumbass shooting through his own cheekbone to get more likes on Facebook. Hope that worked out for him.