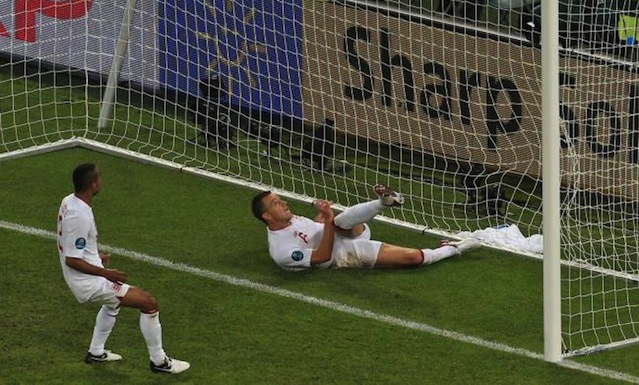 The president of Ukraine, Viktor Yanukovych, has blamed the unsteady political climate and resulting riots currently being experienced in the country on John Terry.

The president of Ukraine, Viktor Yanukovych, has blamed the unsteady political climate and resulting riots and trouble in the country on John Terry.

Violent clashes between protestors and police are actually down to Yanukovych’s decision to not sign a partnership agreement with the EU.

But the president told two American senators last month that he still holds several grievances against the EU, including the fact that his country had a goal disallowed against England in a 2012 Euro Cup match.

This was obviously before Hawk-Eye technology — Marko Devic’s ‘goal’ had gone past the line but the officials ruled that Terry had managed to clear it. England went on to win 1-0 and, according to Yanukovych, Ukrainians were humiliated during their first ever hosting of the tournament.

It’s worth noting though that some feel that Artem Milevskiy, the would-be scorer, was offside before the goal.

US senator Chris Murphy said: “It was the longest monologue to which I have ever borne witness. At one point he spent more than a few minutes talking about a disallowed goal by Ukraine in a 2012 Euro Cup match against England.”

Yanykovych assures he will still lead his country into the EU when the time is right.