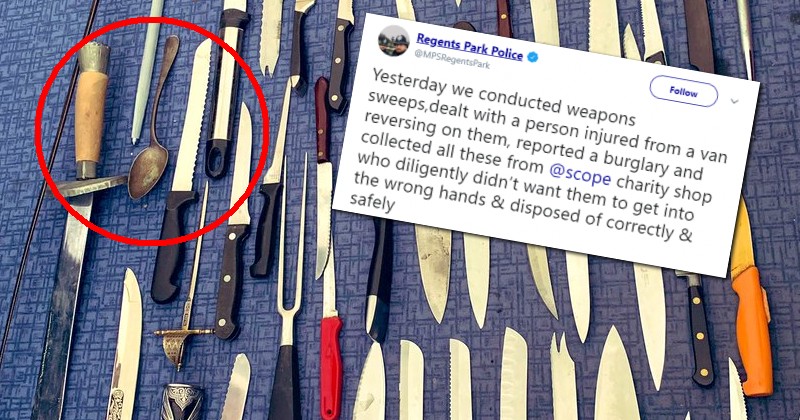 We’ve shared footage of the police doing some topnotch work recently, especially when it comes to tackling violent crime, but that’s not to say they don’t still leave themselves open to ridicule from time to time.

London’ Regents Park Police shared a Tweet the other day bragging about the dangerous weapons they’ve recently taken off the streets of London.

What are some of those dangerous weapons? Regular kitchen knives, a knife sharpener, barbecue forks and… a old rusty spoon.

Yesterday we conducted weapons sweeps,dealt with a person injured from a van reversing on them, reported a burglary and collected all these from @scope charity shop who diligently didn’t want them to get into the wrong hands & disposed of correctly & safely pic.twitter.com/GNfxZd6iGd

Who are the citizens you’re meant to serve and protect; Captain Crunch and Count Chocula?

Imagine if that spoon fell into the wrong hands pic.twitter.com/MdeuOkw0OX

One of those “weapons” is a literal spoon Thank god you are saving the soup and cereal.

Until you get every spatula, no one is truly safe.

First they came for the spatulas, and I did nothing.

The same police force was also ridiculed last year for confiscating pliers, scissors and a screwdriver:

These items were found during a #weaponSweep near #MackworthHouse #AugustasSt during #OpSceptre . Safely disposed and taken off the streets pic.twitter.com/53HdeqMKu1

It’s good to see the police hard at work and big up Regents Police for all the other great work they do – but you’ve got to expect a bit of flak after Tweeting that out.

Unfortunately the war on spoons doesn’t really seem to be helping reduce knife crime in the UK, no thanks to our justice system letting people like this go free.