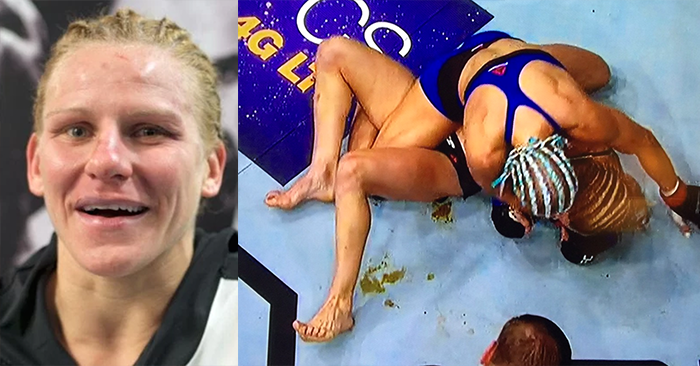 Best move she could have made.

Remember a couple of weeks ago when UFC fighter Justine Kish ended up crapping her pants in the octagon whilst trying to escape a choke hold towards the end of the fight? Here’s a reminder.

Of course you do because it was just one of those things you would never, ever have expected to happen. Mainly because if you’re like me, you didn’t know that girls actually pooped up until this point.

Anyway, the story didn’t end there as it turns out that crapping her pants might be one of the most financially rewarding decisions of her life as some dude is trying to buy those pants for an eye-watering amount of money. Here’s what Kish recently revealed about it:

Justine Kish shit the cage #UFCOKC a close look at when and where pic.twitter.com/buTFd5UjJ9

The most lucrative offer I’ve got is someone messaged me and said, ‘hey, I would like to buy your shorts to hang them up and blah blah blah, in my man cave.

I was like, this is disgusting – there are some really disgusting people out there.

He gave me his name, his email address, all these things.

I really don’t want to give too much details, but that was the most lucrative offer and I’m not gonna… I mean, why?

People are saying, ‘send them over, just go do it,’ I’m like, ‘oh, alright, well I’ll give him my information, but I don’t see how this is actually real’.

Hey, don’t look a gift horse in the mouth eh? If I was offered $15,000 for my poo stained boxer shorts I would be absolutely loving it, not complaining. Some people huh?

For more of the same, here’s a girl crapping her pants whilst she’s twerking. Awkward.