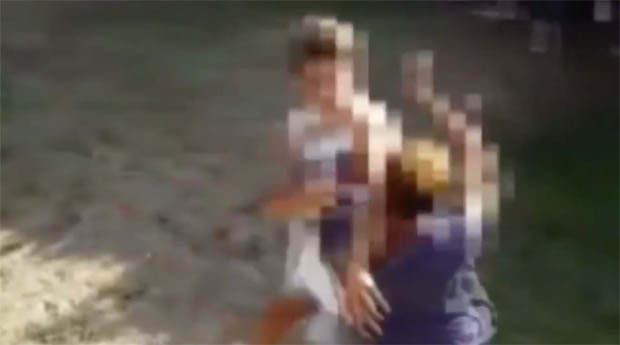 The first rule of Fight Club is, you don’t add people to the Fight Club WhatsApp group.

‘Fight Club’ is viewed as the seminal movie of a generation and several copycat organisations have emerged all over the world as a homage to it.

The latest of these has been discovered in Spain near the town of Lugo, close to the city’s 3rd century Roman walls. The fights last three minutes and are organised via WhatsApp, enabling hundreds of kids to turn up to watch the two teenagers beat the snot out of each other.

One of the ringleaders explained the process:

There’s a cul-de-sac leading to the spot where they take place that we put a look-out on so we know when police are around.

We know who the undercover cops are and we know the cars they use. They’ve never caught us.

There’s a fight at least once a month.

There are rules, referees and look-outs to make sure the police don’t spot us.

One fight was between two lads who had a fallout over a girl. You have a problem with someone and when you see you can’t sort it out amicably by talking you organise a fight and that’s it.

To be fair, it sounds like a perfectly safe way to settle a beef you have with someone. Sure, you might get the crap kicked out of you but because there’s a referee and rules, it’s not like you’re going to get so beaten that you’ll suffer permanent injuries or brain damage, which could happen if you just had a fight with someone on the street. Fair play to them I guess.

Not everyone thinks like me though, as police have admitted that they’re investigating the fight club with a view to shutting it down. It sounds like these kids have their heads screwed on and could probably outsmart them though, so let’s hope they figure that out.

For some absolutely brutal fight club shit, check out this footage from one over in Thailand. Ouch.