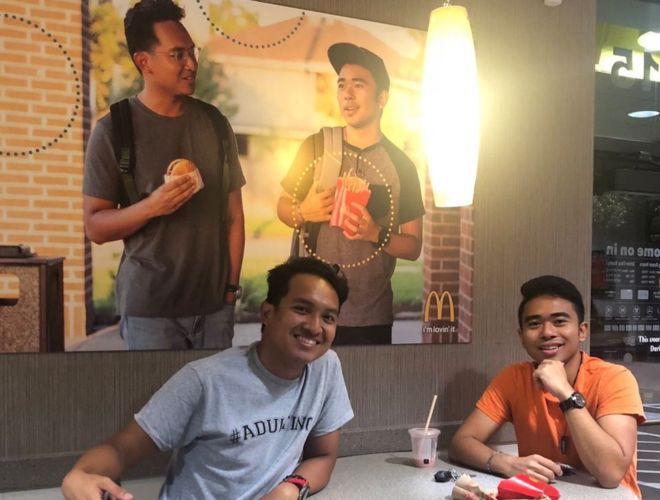 Anyone who has ever been in McDonald’s will know that the inside of their establishments are usually decorated with pictures of attractive looking people standing around enjoying McDonald’s and looking cool. It’s inevitable.

However, in Houston, Texas a guy called Jevh Maravilla noticed that there were no people of Asian heritage represented in his local McDonald’s, along with a prime piece of real estate on the wall where they could put it. Jevh enlisted the help of his friend Christian Toledo and went about getting it up:

There were no Asians. We took the photo outside the neighbourhood events centre while a Zumba class was going on, looking like students.

We needed one friend to record and two friends to help me hang it up.

I was very, very nervous waiting for over half an hour before the coast was clear, but we were able to get it up without a hitch.

We put adhesive on the back so it could be taken down. We didn’t want to vandalise the restaurant.

However we put it up on July 13th and it’s still there.

We all deserve equality and all races deserve recognition. I don’t know why McDonald’s marketing didn’t include Asians, but often in the media Asian men are not shown as masculine and Asian women are just portrayed as cute and pretty.

When I was growing up, Asian people only appeared in movies as martial artists or funny side characters.

I guess the guy has got a point and his YouTube video and tweet about it have both gone through the roof since he posted them, with many people supporting him and saying that this is the way that they want Asian Americans to be represented in the mainstream media. Hopefully some people will take notice of that but I just find it more funny that they nailed the poster design so well that nobody even noticed that the poster wasn’t supposed to be there over a two month period. That’s what I’m all about.

For more McDonald’s, check out a JCB smashing one up in a failed robbery attempt. Balls.