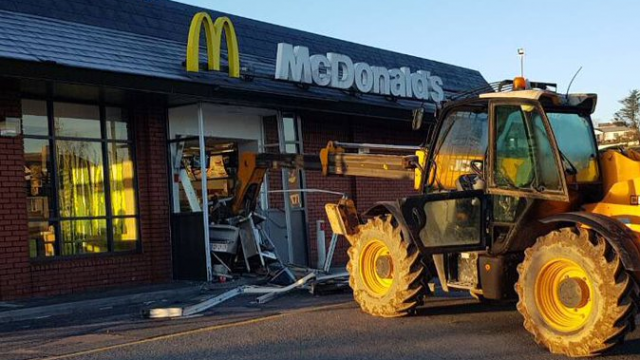 If you wanted to rob a McDonald’s, I would have thought the easiest way to do so would be in an old fashioned stick up, but apparently over in Ireland they want to try out some more inventive methods – like ramming a JCB into one and smashing it up.

The picture you can see above was taken by Dr Paul O’ Brien at 7:33 a.m. this morning in Limerick – guess he was on his way to get his egg McMuffin – and it seems like some robbers smashed into McDonald’s with a rogue JCB, presumably either to steal some Big Macs or some money. The incident apparently happened at 2:50 a.m. that morning, but nothing was stolen despite the fact they tore the place up good and proper. Maybe it was just a drunk JCB driving around that accidentally smashed into McD’s by accident?

McDonalds in Castletroy this morning. Does anybody know if this was deliberate? #Limerick pic.twitter.com/jjPS19tKBE

Damn. I imagine the Irish police are conducting a full investigation into this right about now.

Interestingly enough a JCB was used recently to rob a Lidl in Ireland during the show. This caper was a bit more effective as they managed to smash in the roof of the store before then grabbing a safe and transporting outside.

Unfortunately (for the crooks at least) they weren’t able to get it open until some people on the streets managed to stop them. Not sure if these two crimes are connected but if they were that would be one hell of a weird crime gang wouldn’t it? Can’t really see the JCB gang, JC Blinders or anything like that taking off – or it being a very effective form of robbery, but hey I guess you never know.

For more JCBS, check out Russia’s idea of a waterpark. Yeah, it is what you’re thinking.