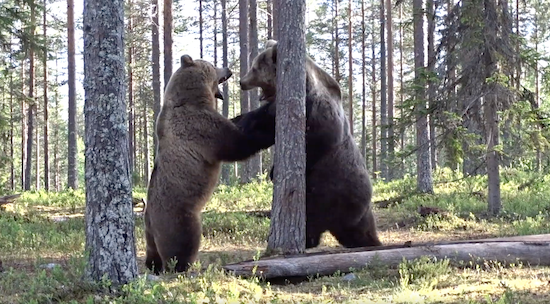 There’s nothing like stumbling upon a fight between two animals in the wilderness, going at it hell for leather with nothing to lose and this video illustrates exactly why this is the case.

Taken over in the Finnish forest in Kuhmo, Finland, the high quality footage rivals one of the best UFC fights you’ve ever seen for pure brutal carnage and destruction. Take a look for yourself below, but be warned that there’s only one winner of this one so you might not wanna get too attached to either of them:

OK so it did kinda peter out towards the end there but for a bit of it, it was freakin intense. When they just get up on their hind legs and are like ‘yeah OK we’re going for this’ then and whoa is it brutal.

Would have been better if they actually ended up obliterating each other and not just slinking off because both of them were so beat up and scared, but I’m still pretty stoked I saw two bears fight in any way that level of intimacy. Beggars can’t be choosers.

For more of the same, check out this guy who survived a grizzly bear attack by biting its tongue off. Top tip.