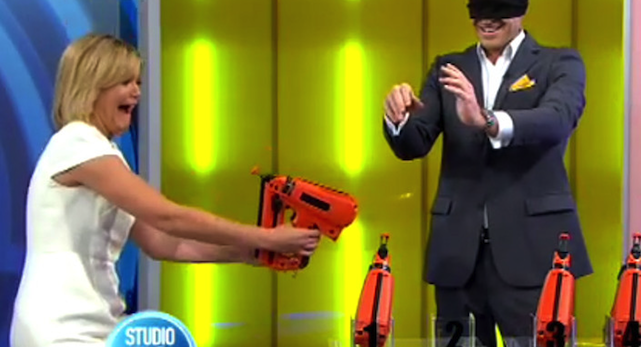 Stereotypes about women and power tools really live up to expectations in this clip.

Well this is fucking stupid. I mean how hard is it to point a nail gun in the right direction?

Apparently pretty difficult if you’re a female Australian television presenter named Sarah Harris, who was filming a spot for a show where she had to point a nail gun at the head of a blindfolded mind reader called Anthony Laye in some kind of weird nail gun roulette kind of stunt. Instead of pointing the end of the nail gun at him though, she held it the wrong way round and was only moments away from blowing her head off before fortunately a producer stepped in and corrected her mistake.

Considering it was a live broadcast, it could have made some interesting television if she hadn’t been stopped. Although obviously it would suck, just imagine how awesome it would be when you saw someone blow their brains out with a nail gun in the middle of the day on live television. Just imagine.