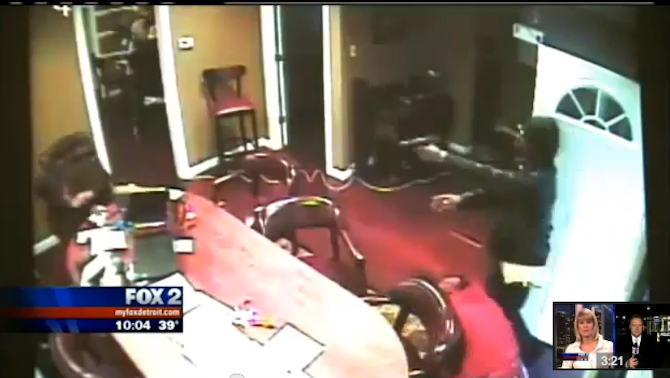 There’s a lot of debate over the legality of guns over in the states right now, but some meatheads are using this video of a security guard with a rifle scaring some robbers with handguns off as a pro gun lobby, which is completely stupid.

Ever since I ‘liked’ National Gun Appreciation Day‘ on Facebook because I decided to write an article about it for Sick Chirpse I’ve been getting these dumb updates from them about pro gun propaganda. I mean sure, I should probably just unlike the page or unsubscribe from it or whatever, but it really is funny checking out some of the stupid updates they post all the time. And this pretty cool video also came up on my feed and I thought it was worth sharing here on Sick Chirpse.

Now obviously I’m not pro gun ownership because to me it seems like one of the stupidest things in the world but this clip is pretty funny. Some armed robbers with guns tried to stick up a tax preparation business over in Detroit, Michigan (of course there was an attempted robbery over in Detroit Michigan. Detroit What!) but it turned out they bit off a little bit more than they could chew. This was because the security guard who was looking after the place was packing an AR-15. This is an AR-15:

â˜› This Is Why Guns Are Stupid: Guy Shoots Himself In The Chest

For those of us who don’t know anything about guns – which I’m assuming is everyone reading this because we’re not idiot Republicans from the Deep South – an AR-15 is a semi automatic rifle.  Looks pretty tasty huh? So basically if you’re some stupidass mugger with some crappy little handgun you’re gonna feel like the unluckiest motherfucker that ever got born if you try to rob a place where the security guard is packing one of those badboys. Naturally, the robbers hightail it the hell out of there, although they do somehow manage to get a shot off and somehow nail the guard in the leg, which kind of negates the fact that he had such a badass gun.

Of course, the fact that this appeared on the National Gun Appreciation Day’s Facebook feed meant that the article that accompanied it was all pro guns and saying how the fact that the guard had a bigger gun than the perps meant that he managed to thwart the robbers and potentially save the lives of everyone in the building, despite the fact he got shot in the leg. Although that is KINDA true, maybe if guns were illegal in the first place these robbers wouldn’t ever be able to get their hands on them so the chances of a robbery or way less likely!? Ever think about that you stupid idiots?

The article continues by launching a debate into whether American citizens should be allowed to won automatic rifles . The AR-15 was only a semi automatic and so couldn’t fire sustained rounds at their attackers. This article actually argues really stupidly that American citizens should be allowed to own automatic rifles because if they’re being robbed they might not know how many attackers they are facing or their positions in the room and that having access to an automatic rifle would make this situation a lot better.  They also argue that citizens need to be given the same legal options as criminals in regard to their choice of rifle. This is a serious argument. Seriously.

I mean come on? This isn’t Gran Turismo or Assault On Precinct 13 or something, surely the less people that have automatic rifles – or even semi automatic rifles – in any given situation the better so that they don’t end up killing each other and anyone else in the immediate vicinity and destroying all the property as well. Like how can that not be obvious to idiots who write this crap?

Unfortunately it isn’t and you also get a bunch of idiots like this (who are all from retarded hick cities) backing it up in the comments section. Check out some of these meatheads:

â˜› Here’s Another Meathead With A Gun: Man Pulls Gun On Pregnant Woman Because She’s Smoking 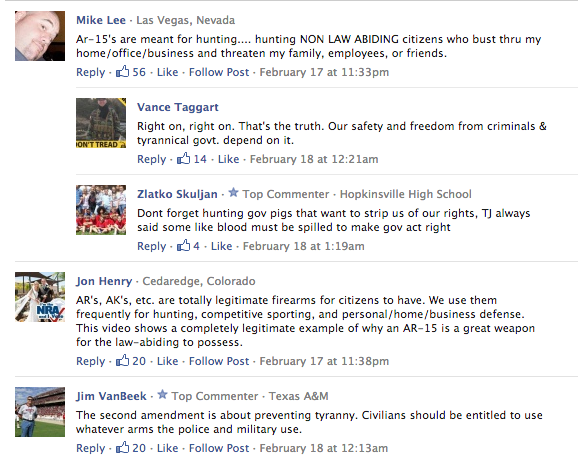 I really hope people get less stupid before I die, but I can’t really see it happening the way it’s going. You can read that stupid original article HERE but it is really stupid and to be honest I can’t believe someone even wrote it so I wouldn’t bother. Americans are so dumb when it comes to guns.

Anyway this video and news report are pretty funny so check these out instead: