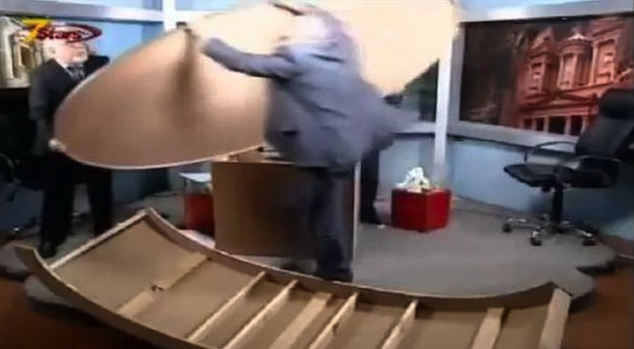 Although Newsnight is pretty good these days, it doesn’t really have anything on this kind of madness.

The subject of politics has known to get pretty heated/violent at time – hey I mean look at all the wars that have gone over the years – but this next clip is pretty ridiculous.

Shaker Al-Johari, head of the Electronic Media Association in Jordan, and Mohammed Al-Jayousi, editor-in-chief of the news website Al-Mustaqbal al-Arabi, were appearing on some show over in Jordan called Between Both Ways which airs on the 7 Stars Network over there.

Apparently, Al-Johari was accused by Al-Jayousi (don’t get confused by them, yeah?) of being a supporter of the Syrian revolution – as well as a deviant, whatever that means – to which Al-Johari countered by accusing Al-Jayousi of supporting Bashar Al-Assad’s regime in exchange for money. Confused? Me too.

All you really need to know though is that this led to them pushing the debate table that they were sitting at each end of into each other, which eventually caused it to snap and break. Al-Johari then ran at Al-Jayousi and tried to kick him, at which point the pair were separated by TV officials.

Brings a whole new meaning to the phrase ‘aggressive debate.’