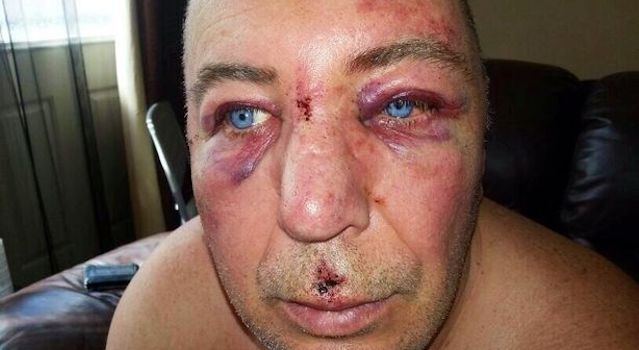 As gross as some of these scenes are, they’re inadvertently made hilarious by the fact that there’s an announcer spouting inane comments over the PA during it.

Radcliffe Borough vs Lancaster City is probably not a fixture that you would expect to be marred via massive crowd trouble (or even a massive crowd) but that’s exactly what happened at the weekend when the game was invaded by the fans, players and officials from the nearby Ramsbottom United game (which had been called off) showed up to spoil their evening.

The brawl itself was pretty shocking, with three people ending up in the hospital because of it, one with a broken nose and fractured cheekbone, and there isn’t really any explanation as to why it happened, other than perhaps that everyone involved with Ramsbottom United is a massive thug. It just sucks that people feel the need to brawl over stuff like this, especially when the players themselves are getting involved too. I guess that’s the passion of non league though right?

Although the video below is pretty crappy footage of the brawl – who the hell records anything from that far away on the portrait setting huh? – it’s particularly notable and also unintentionally hilarious thanks to the efforts of the stadium announcer to stop the brawl. He throws out comments like ‘this is getting embarrassing now’ and ‘please stop it. You’re making a right spectacle of yourselves’ in a really gimpy voice like this is going to have an effect on people who are kicking the shit out of each other. Nice one poindexter.

No official statement has been released by any of the clubs but Ramsbottom manager Anthony Johnson said via his Twitter that nobody from their club instigated the violence and that weapons were used against them at the ground. Messed up, and probably something you would think you were more likely to see in South American non-league than the north of England.